oth a modern ultrabook and a major gaming machine, the Asus ROG Zephyrus G14 GA401IV-147T in 14-inch format is shaking up the codes. This new portable PC in the compact format and at a light weight of 1.6 kg contains a large processor, the AMD Ryzen 7 4800HS Renoir Octo Core, a small power bomb capable of propelling the G14 towards advanced versatile spheres and intended for creatives and players alike. These will find in the GeForce RTX 2060 and in the FreeSync screen a high-end quality support. These key components are assisted by a good level of RAM (16 GB) and SSD storage (1 TB) for the speed of the system and supplemented with interesting amenities for nomads such as a beautiful autonomy of 6 hours, a biometric reader , Wifi 6 or a USB-C connector that supports the charge. Be aware that the G14 does not have a webcam or TB3 and that its noise and heating level is inconvenient in light use. 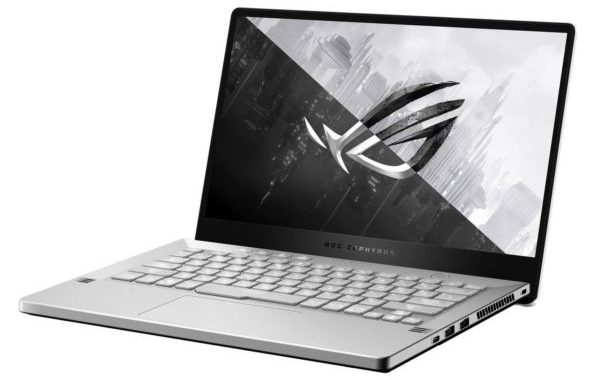 Asus wanted to give its own identity to its Zephyrus G14, and this notably involves design. The GA401IV-147T has the color “Moonlight White”, a design that ultimately only white with the cover, with the silver base and the frame of the black screen. It\’s elegant and stands out at the same time, without ostensibly evoking gamer DNA. Besides the half of the cover covered with perforations and the clearly angular silhouette, the chassis does not receive much more visual elements, reflecting a certain sobriety.

But it\’s another design element that catches the eye. This model is equipped with the AniMe Matrix option which allows images and gifs to be displayed via LEDs through the perforations on the back of the cover. Specifically, a total of 1,215 individual mini-LEDs can be used to display custom images and animations via the ROG Armory Crate utility. Note that Asus announces the arrival of future updates that will allow you to ” follow status notifications that will keep you informed of new messages, battery life, and more “.

Now let\’s take a look at the ultrabook gamer measurements, which are particularly well optimized. With 1.6 kg on the scale and 18 mm thick , it is clearly ready to share your movements without being noticed. We also note that Asus has equipped the G14 with ErgoLift hinges installed until then on its office and multimedia ranges, allowing the opening of the screen to tilt the base slightly and thus, to circulate the air below. .

The 14-inch screen is another selling point. The black frame around is fine to ensure immersion and its attributes favor both the player and the versatile user. Indeed, its Adaptive Sync (FreeSync) technology ensures perfect synchronization between the screen and the graphics card to avoid any effect of latency or micro stuttering in action. On the other hand, the screen is bright and rich in color (Pantone certification, 100% sRGB) for those who would like to work on video or images. It also offers a classic definition and format at this level: Full HD (1920x 1080 px) 16: 9, which is ideal for gamers today, but the screen frequency is apparently limited to 60Hz. on this model (to be confirmed).

Distributed on each side of the chassis, the connections are fairly limited and a little too tight because of the ventilation grids that are very present. There are two USB 3.2 Type-A ports (standard format), an HDMI output as well as two USB Type-C Gen2 ports , one of which is compatible with video stream and power, a plus for nomads. However, there is no Thunderbolt 3 on the menu, no RJ45 port or card reader.

Good point, a biometric reader was hidden in the ignition button of the PC to connect instantly via Windows Hello. Note also that the connectivity modules can rely on the latest Wifi 6 (802.11 ax) and Bluetooth 5.0. Last but not least for video enthusiasts, the Zephyrus G14 does not have a webcam .

The great strength of this Asus ROG Zephyrus G14 GA401IV-147T, we find it on the side of the processor based on the Renoir platform (2020), a key element that allows to increase the power like never seen in such a small chassis. Here, this an AMD Ryzen 7 4800HS Octo Corewho officiates, namely that the letter “S” at the end of the reference translates a TDP passed to 35W against 45W for the standard 4800H version. But fear not, the performance is still there since the processor deploys enough to satisfy the most demanding of you with capacities close to those of an Intel Core i9-9880H Octo Core and whatever it is much higher than that of an Intel Hexa Core (i7-9750H / i7-10750H). In fact, tasks capable of exploiting the 8 cores such as certain content creation, 3D modeling or video editing software will find the perfect working support here. Especially since the processor is assisted by 16 GB of RAM ,

But the Zephyrus G14 takes on even more scope with the discovery of its graphics card entrusted to the NVIDIA Turing GeForce RTX 2060 (2019). It is a high-end solution which is intended for expert players who will be able to launch the most recent and greedy titles in High / Ultra with 60 FPS minimum. It also makes it possible to serve Ray-Tracing in compatible games and thus benefit from a stunning realism. Creatives are also on the front lines to take advantage of this powerful card which can speed up processing in compatible applications.

Small precision which is important, it is possible to easily open the G14 but the upgrade options are limited to a RAM slot (another is soldered) and the only M.2 port equipped. Furthermore, as our test reveals , we find that Asus has a hard time controlling the temperature and noise of the ventilation inside the G14. Expect an intrusive noise whatever the use, even slight, and the configured profile.

But that\’s not all, the ultrabook also contains a large capacity NVMe SSD storage (1 TB) . The system benefits directly compared to a configuration with mechanical hard drive because of the speed of loading offered by the SSD. This type of storage provides almost instantaneous on and off phases, transfers calculated in seconds or instant software launches where the mechanical support involved significant latencies. Note also that the SSD is inherently quieter, more robust and efficient than a hard drive. And if it is often tackled for its storage capacity that is too low, it is not the case here since it provides 1 TB, enough to allow

Let\’s not finish an element that will interest nomads, autonomy. The 76Whr battery and NVIDIA Optimus technology – which deactivates the GTX 1660 Ti when the use is light – should allow the ROG Zephyrus G14 GA401IV to provide an autonomy of around 6 hours in web browsing via Wifi. It is particularly impressive at this level of power. And for nomads, know that it is possible to recharge the PC via one of its USB-C ports, a characteristic that few PC gamers offer. 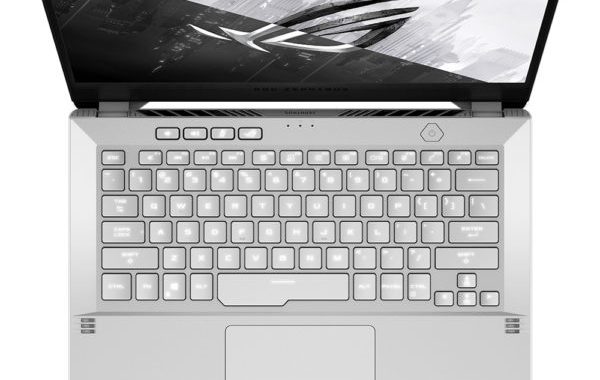