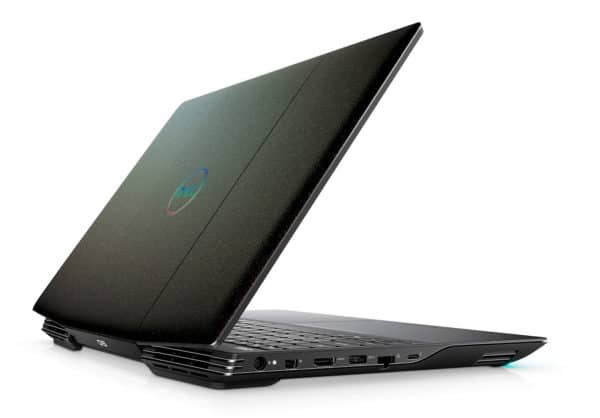 Black gaming laptop PC with Thunderbolt 3 USB-C connectivity, the Dell G3 15 3500-853 is equipped with a 15-inch Full HD anti-glare screen whose frequency of 120Hz improves fluidity in games. It is able to run many titles thanks to its GeForce GTX 1650 Ti NVIDIA Turing graphics card which also speeds up processing while its responsiveness is enhanced by its fast SSD storage. Efficient thanks to its Quad Core i5 Comet Lake-H processor, it also benefits from a backlit chiclet keyboard.

For a gaming laptop PC whose codes it uses with its black case with angular lines and touches of blue, it adopts a relatively sober, original and nevertheless gamer appearance.
It is cooled by 2 fans and heat pipes.

In terms of connectivity, this computer is well equipped with its USB-C Thunderbolt 3 (still rare at this price level), its practical HDMI and mini-DisplayPort video outputs for easy connection to a TV or monitor for example, its Bluetooth 5.0 and Wi-Fi ac modules to communicate and connect remotely wirelessly, its Ethernet and audio ports not to mention its 3 USBs (compatible with both USB 2.0 and USB 3.0), USB 3.0 guaranteeing transfers up to ‘at 10 times faster than USB 2.0 if USB 3.0 devices are connected to it.

A backlighting system is fitted to the chiclet keyboard, which is practical for distinguishing its keys in a dimly lit environment. In addition, the keyboard is splash-proof, which will be appreciated in particular by those who are used to keeping something to quench their thirst near their PC.

To appeal to gamers, the screen adopts a refresh rate of 120Hz which improves fluidity in games compared to the 60Hz standard. With its thin edges, the screen is also very suitable for displaying High Definition content such as videos due to its precise Full HD definition and its 16: 9 format. As it is anti-reflective, the screen also offers better visibility than a shiny panel in a bright environment (eg outdoors).

Thanks to its dedicated NVIDIA Turing GeForce GTX 1660 Ti graphics card, it is able to run a maximum of games if we agree to adaptations under graphics-intensive titles to obtain good gameplay.

The GeForce GTX 1660 Ti will also be of interest to creatives because it speeds up processing in software that takes advantage of GPU computing power, which is the case for example with Adobe Premiere / Photoshop or Sony Vegas.

Like the integrated Intel UHD 630 processor solution, the GeForce GTX 1660 Ti of course allows you to view photos.

It is the NVIDIA Optimus on-board technology that automatically switches between the two in real time, as needed. Optimus gives maximum preference to the Intel UHD 630 despite its modest features because it favors battery life compared to the GeForce GTX 1660 Ti.
In this regard, expect about 5 hours of battery operation in light use.

The Intel UHD 630 is more precisely housed within the Comet Lake-H Quad Core i5-10300H processor, here coupled with 8 GB of RAM.
The general performances delivered by this duo are able to satisfy a maximum of users.

Thanks to the Core i5-10300H, for example, we benefit from faster processing than with a low-consumption Quad Core in areas requiring CPU resources using multicore, such as video editing, photo editing or 3D rendering.

On the storage side, Dell has chosen an SSD here. It has the advantage of providing much better fluidity and responsiveness on a daily basis than a simple hard drive.
Thanks to the SSD, for example, we get faster on the cards of online games than with a simple hard drive and we benefit from much faster game / software launches as well as start / stop and processing. 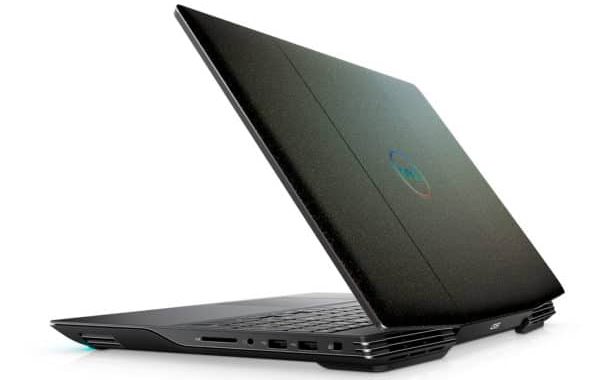 It must be said that an SSD is much faster than a hard drive while being more resistant to shocks, more energy efficient and silent.
With its 512 GB, the onboard SSD rivals the standard of hard drives in terms of capacity.

Of course, if you need additional space, you can use an external storage unit. Favoring a USB 3.0 / USB-C / Thunderbolt device then represents an interesting option for obtaining fast transfers.

Finally, keep in mind that this gaming laptop PC is heard and heats up, to the point that it is not recommended to use it on the knees or on a duvet when pushed (eg: games, treatments).