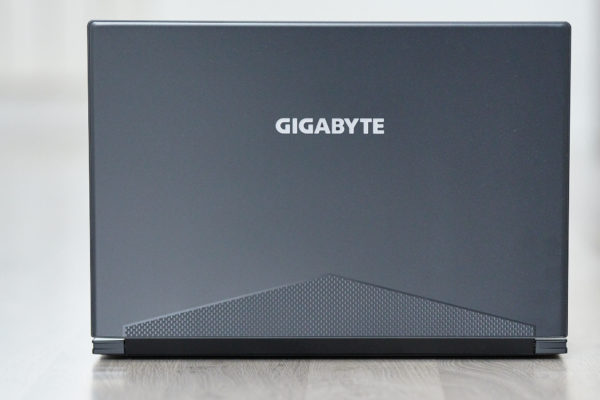 When it came out, the Gigabyte Aero 15X caused a sensation. And for good reason, he was one of the first ultrabook to offer a configuration of the most powerful capable of seducing gamers adept the latest AAA titles while wearing a sober look compatible with a professional environment. Since then, the Aero 15 has had several updates to offer the latest processors and graphics cards to stay in the race. But faced with increasingly fierce competition, is it enough? Elements of answer through our test of the Aero 15 Classic.

Specifications of the Gigabyte Aero 15 Classic

At first glance, it’s difficult to distinguish the “original” Aero from the latest models marketed since the spring of 2019. Among its strengths, the aluminum chassis offers excellent rigidity, both in terms of keyboard and screen, while enjoying a weight content (2.1 Kg). 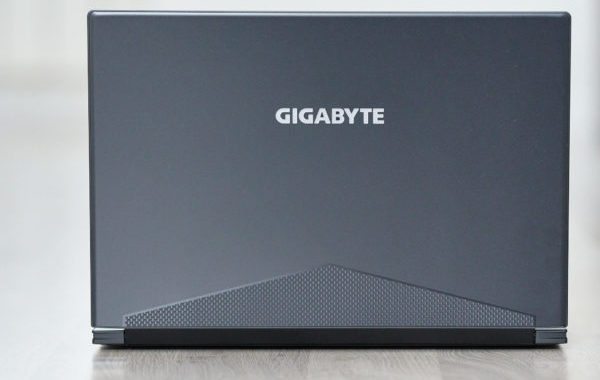 Side look, sobriety is appropriate even if some may still blame him for a logo (too) imposing, especially as it illuminates when the computer is running (without possibility to disable it). The carbon pattern on the back of the screen may also cool some potential buyers.

If the chassis does not suffer from major defect, Gigabyte could have made some improvements to the image of the edges always a little too prominent to our taste. Some adjustments also deserve a little more care. Let’s face it, these are details, but the Aero is positioned as a premium laptop and as such, buyers are entitled to expect excellence, especially as the competition is today much more than in 2017. In this respect, the Gigabyte inscription reveals a difference of material inside the letters A and B. 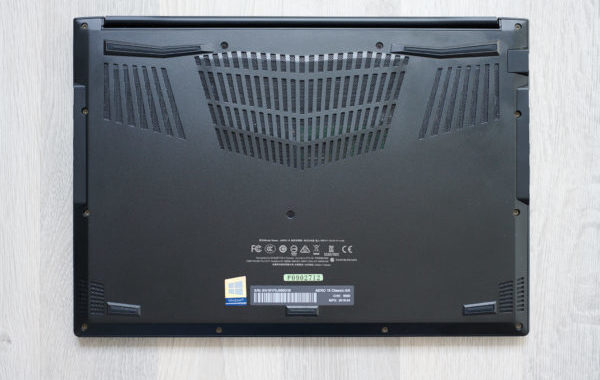 The lower face has wide vents. Small detail, when the backlight of the keyboard is lit, it is possible to see the lighting of the fans. 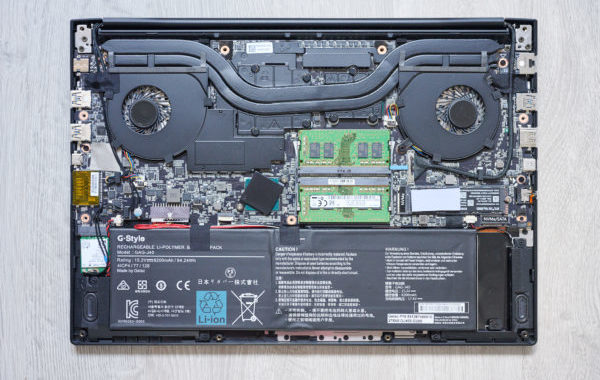 Access to the components requires a Torx T6 screwdriver and we recommend a small plastic lever (like those in this kit ) to facilitate the opening of the underside. Bad point for Gigabyte, and while the practice tends to disappear, a sticker showing the opening of the chassis is present. Side upgrade, it is possible to replace the RAM (2 slots), the SSD or add a second, a free slot being present.

On the right, the Kensington anti-theft port, the power outlet, two additional USB 3.1 ports (gen 1) and Thunderbolt 3 (USB-C), and the SD card slot. A feature more and more rare on recent laptops. The Aero 15 is distinguished by the support of the UHS-II standard that allows you to take advantage of higher speeds to unload its cards. In practice, with compatible SD cards, it is possible to touch the 300 MB / s. To date, only the Surface Book 2 of Microsoft also offers this feature.

Located below the chassis, at the level of the wrist rests, the two small speakers struggle to convince. The Nahimic software can significantly improve the rendering but the lack of depth remains screaming.

If the look can leave some doubt about the gamer vocation of this laptop, the keyboard is primarily designed to seduce the players. So we find a fairly straightforward feedback (race of 1.5 mm) that requires a firm strike. The keys take advantage of classic dimensions (15 x 15 mm). However, the fact that they are glued to the edges of the frame (barely 5 mm margin) may require a little adjustment time. During the first minutes of use, it is therefore common to press the key next to the desired one (for example the z instead of the a). The sound of the keys is for the most part quite discreet, however, some like the spacebar or the Shift key have a much drier sound (at least on our model), which hinders the discretion .

The backlight can be adjusted in two intensities via a keyboard shortcut. For further settings, it is necessary to use the ControlCenter. Utility that allows, among other things, to customize the color of each key and / or apply style effects to the backlight scheme. It is also possible to assign macros to all keys.

The touchpad (106 x 70 mm) is pleasant to use. Its very smooth surface allows a glide very, if not too fast. A quick tour in the Windows settings of the touchpad allows you to make healthy adjustments.

Screen of the Gigabyte Aero 15 Classic

Let’s finish with a word on the webcam. Due to the minimalist borders (5 mm), the camera is integrated between the keyboard and the bottom of the screen. The angle of view is therefore unflattering, which will limit its use. The images delivered lack detail and present a very present as soon as the brightness declines.

The Aero 15 Classic is now available in several configurations, from the Core i7 to the Core i9 with the latest Nvidia GeForce RTX graphics cards or the GTX 1660 Ti as on our model.

In practice, this graphics card offers very close performance, although slightly higher than a GeForce GTX 1070 Max-Q while being less energy-intensive. In practice, it will be possible to run most recent games around 70 FPS Ultra or more than 100/110 FPS High. The RTX 2060 will stand out by an average of 5 to 10 FPS more depending on the game. On the application side, the test under Geekbench reveals a nice gain in OpenCL compared to the GTX 1070, which can make the difference with software that can defer calculations on the GPU.

The processor is a Core i7-9750H, the latest addition to the Intel hexa-core series that succeeds the Core i7-8750H. Main differences, a nominal frequency that climbs to 2.6 GHz and up to 4.5 GHz in Turbo mode when only one of the cores is requested (against 2.2 GHz and 4.1 GHz on the previous generation). The L3 cache climbs to 12 MB (vs 9 MB). In practice, this translates into a slight increase in performance in our various benchs, of the order of 5/10% on average. Always good to take but not enough to justify an upgrade if you already have a laptop with 8th generation hexacore processor.

The RAM consists of two 8 GB Samsung DDR4-2666 barrettes. Little regret, Gigabyte did not opt ​​for a SSD Samsung Evo 970, the reference of the segment but for an Intel 760p, a little less powerful. At least on paper because in practice, you can not feel a difference every day.

Like the Aorus 15 (a division of Gigabyte), the Aero 15 embeds an “Artificial Intelligence” (AI) based on Microsoft’s Azure technology. The goal is to optimize in real time the frequencies of the various components while adjusting the speed of the fans according to the tasks in progress.

In use, we are always skeptical about the interest of this AI. Obviously, on the Aero 15, Gigabyte chose to favor comfort by limiting around 42/45 dBA the speed of the fans, and this, whatever the profile chosen (AI Edge / Azure AI / AI Azure Download and Upload). As a result, the noise is certainly (more) bearable but the components can not express their full potential. To do this, it is necessary to disable artificial intelligence and then force the maximum fan speed while activating level 4 performance. There are slight gains. For example, under Davinci Resolve, our export goes from 1m51 to 1m43. Same as Capture with a gain of 8s. At stake, same observation with differences of 1 to 3 FPS depending on titles. However, does it deserve to support a constant noise of 53 dBA? Probably not …To know that all our measurements were carried out according to this setting (IA deactivated)

Anyway, this is one of the advantages of the Aero compared to the Aorus, the ability to take over to manage or even customize the ventilation curve via the utility Gigabyte but we’ll come back.

Side temperatures, the report is hardly more cheering. Even with the fans running, the processor has an average of 86 ° C and the 77 ° C graphics card in play, which is high. And yet, in early June, the weather capricious allows us to enjoy favorable conditions since the ambient temperature of the office is around 22 ° C. The limit of a thin chassis with such a configuration.

On the surface, in auto mode, the underside of the chassis becomes very hot just a few minutes of solicitation. If you intend to use your Aero on the knees, a ventilated support will be essential.

On the original Aero 15, Gigabyte liked to put forward a range that can last a whole day. As we saw in our test, the assertion was a little presumptuous but autonomy was still one of the strengths of the Aero. Since then, Gigabyte has visibly changed strategy and no longer puts (as) forward this element even if the battery of 94 Wh is still in the game.

In practice, in light use, for example watching streaming video or surfing the Internet (with active WiFi and the brightness set to 140 cd / m²), the autonomy limits to 5h. Active airplane mode, lowest light level and the most economical power profile selected, it is possible to save up to two additional hours.

Conversely, solicited to the maximum, do not expect to hold more than one hour. Nothing surprising with regard to the embedded configuration.

Let us salute the possibility of limiting the battery charge to a certain threshold and thus reduce the number of cycles and thus increase its lifetime.

On paper, the Gigabyte ControlCenter has it all. A utility centralizing many options, from the keyboard to the settings of the ventilation or the processor without forgetting the management of the updates. In practice, the report is much less encouraging. In question, a certain instability that seems to persist over the versions. Thus, on our model, the utility (version 19.05.10.01) inexorably crashes when the computer is used on battery. You can not adjust the speed of the fans, for example, or the color of the keyboard backlight. And even when reconnecting the power, it refuses to open until the computer has rebooted …

The problem will probably be solved in a future update but we have already plagued the ControlCenter in our previous tests Aero laptops. Again, this type of worry should not be so common, what’s more on a premium range!

Our opinion on the Gigabyte Aero 15 Classic

The Aero 15 is an interesting laptop for more than one reason. First of all because of its compact chassis which integrates nevertheless (very) powerful configurations able to seduce the players as well as the creative ones (videographers, architects, …) needing a big computing power GPU.

Without being the prettiest on the market, its sober look can blend in most environments. The autonomy offers the possibility to stay away from a power outlet for a few hours, at least provided you do not ask too much. Note also a screen of good quality for both play and more versatile use.

His qualities are not lacking. But, when released in 2017, the Aero 15 was a forerunner in its segment, today, the alternatives are many more to be able to shade him while being often more affordable. And rather than just update the components, Gigabyte should have used his experience to refine his Aero and correct small defects, acceptable on a first version, much less on a third jet …