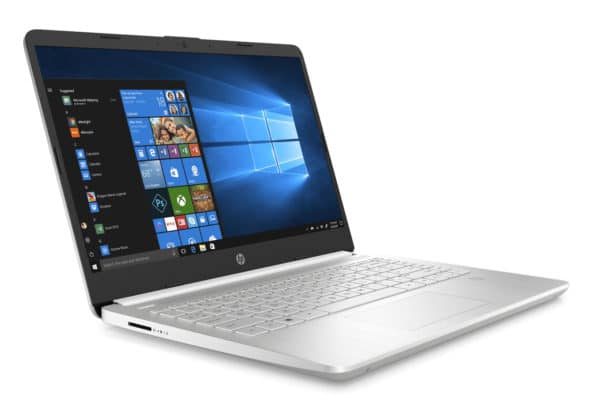 The HP 14s-fq0073nf is a 14-inch ultrabook equipped to support office automation enthusiasts in their daily life. It concentrates a good level of power thanks to its quad-core Ryzen i5 as well as a satisfactory system responsiveness allowed by the 8 GB RAM and the dedicated 256 GB SSD, a perfect package for multimedia. The setting in images is a little less exciting with its 14-inch HD anti-glare screen (768p) slipped into a silver frame that goes everywhere. We have also already seen more compact in its category and the keyboard is not backlit. 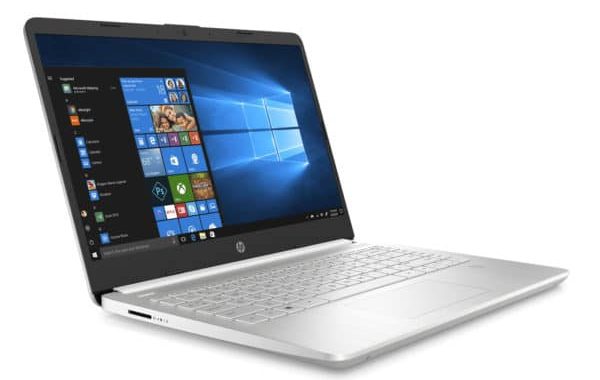 The HP 14s-fq0073nf design does not really change from that of its predecessor (HP 14-cf). Installed in a white polycarbonate shell on the outside and white / silver on the inside, it embellishes the keyboard surround with a light brushed pattern while the cover remains perfectly smooth, dominated by a chrome logo. The screen borders are slightly refined on the sides but we are still quite far from borderless.

The silhouette of the ultrabook has been slightly reworked, particularly in terms of the thickness which loses 2 mm to reach 17.9 mm. The weight is now close to 1.4 kg on this model without hard drive to encourage mobility.

For its part, the connection of the HP 14s-fq0073nf does not do more than expected. There is an HDMI output, three USB ports including two USB 3.1 and one USB 3.1 Type-C as well as an SD card reader. In addition, the wireless modules are fairly recent (Bluetooth 5.0 and Wifi ac) and the Ethernet port is no longer part of the game without too many surprises. The keyboard is not backlit and there is no biometric authentication option (Windows Hello).

The screen also reserves a record that could not be more standard with its HD definition (1366 x 768 px) and the support of a TN panel with narrow viewing angles and average colorimetry. Its anti-reflective treatment is welcome however because it will play its share of comfort by countering reflections to allow working in good conditions in a bright atmosphere. 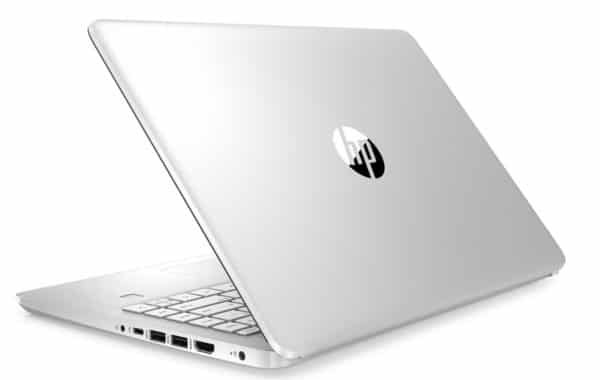 Performance, autonomy of the HP 14s-fq0073nf

Let\’s continue with the component that gives its propulsion to the ultrabook, the recent AMD Quad Core Ryzen 5 3500U low-power processor . Quite close to a low-power Intel Quad Core i5 in terms of performance, it is notably capable of handling common tasks and you can even tackle missions such as photo editing, video editing and light computing without too much shaking. Especially since the APU is supported by 8 GB of RAM , a total adequate to navigate smoothly in multitasking .

The graphics part is managed by the AMD Radeon Vega 8 chipset integrated into the processor, that is to say that it holds the upper hand to the Intel UHD 620 chip of the Whiskey Lake GPUs. While the latter is similar to a GeForce MX110 in terms of performance, the Vega 8 will approach a GeForce MX130 and allow a bit of game in definition and medium details (1366 x 768 px).

Another strength of this HP 14s-fq0073nf, the storage is entrusted to a 256 GB M.2 NVMe PCIe SSD , allowing to bring its share of fluidity to Windows 10 and to the overall execution of the programs, knowing that it is paid at the capacity level. If we count the space occupied by the system and by the programs, there is only about 200 GB of free space, enough to house a small part of your game library. For the rest, you will have to opt for an external or online solution.

Finally, the HP 14s-fq0073nf should manage to squeeze around 6 hours of autonomy from its 41 Whr battery while browsing the web with active Wifi. It is average. 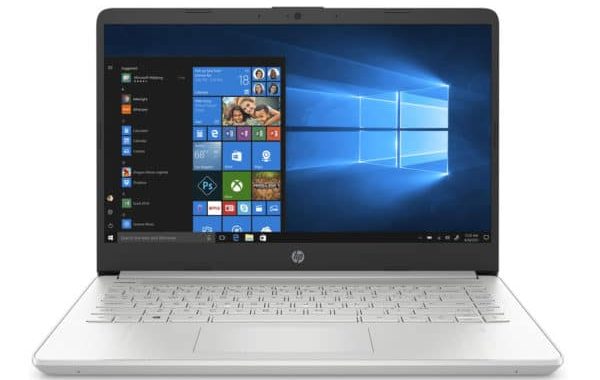