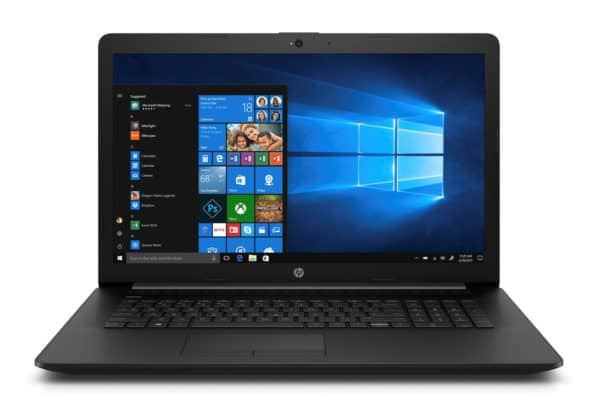 Lightweight for a 17-inch computer, the new black versatile PC HP 17-ca1025nf is responsive thanks to its fast 512 GB SSD storage It benefits from a high-performance Ryzen 5 Picasso Quad Core processor in everyday use, the Vega graphics solution for playing in greedy titles. In addition, you can read and burn CDs and DVDs with this PC, the amount of RAM is standard, however, which is content with Wi-Fi n instead of Wi-Fi ac.

All dressed in black, it sports a sober design with its ebony mesh pattern frame with textured finish and can be recharged to around 50% in 45 minutes.

This computer has standard connectivity. It ignores USB 3.1 Type-C and above all is content with Wi-Fi n instead of Wi-Fi ac newer and efficient, standard for years.
Still, there are integrated audio and Ethernet ports, a practical HDMI video output to easily connect this laptop to a monitor or TV for example, Wi-Fi n and Bluetooth 4.2 modules for connections and communications to wireless distance as well as 3 USB (all compatible with both USB 2.0 and USB 3.0), USB 3.0 ensuring transfers up to 10 times faster than USB 2.0 if you plug in USB 3.0 devices.

In addition, one can read and burn CDs and DVDs with this PC thanks to the on-board optical unit whereas it tends to become rarer with the modes of dematerialization and finesse.

Thanks to its anti-reflective treatment, the screen proves to be less tiring for the eyes over a long period of time than a bright, more readable panel in a bright environment (eg outside).
For the rest, it adopts classic specifications with its definition of 1600×900 and its 16 / 9th format suitable for playing videos. Good point to note, its colorimetry is more faithful than the average, without however reaching that of high-end IPS panels.

The HP 17-ca1025nf is a large format laptop for everyday versatile use.

It stands out for its SSD storage. It competes with hard drives in terms of capacity thanks to its 512 GB while being silent, more energy efficient, more impact resistant and much faster.

Result thanks to the SSD, this PC is much more fluid and responsive on a daily basis than if it were equipped with a simple hard drive. So we get for example much faster start / stop and software launches.

The SSD goes well with the heart of this computer. It includes an AMD APU (Accelerated Processing Unit) Quad Core low power Ryzen 5 3500U Picasso processor (close to an Intel Core i5) delivering good general performance capable of satisfying many users.
However here the Ryzen 5 is associated with a standard amount of RAM of 4 GB which shows its limits in multitasking. To be more comfortable in this area, however, there is the possibility of adding a RAM module to the free slot.

Since it does not have a dedicated graphics card, you would think that this PC simply allows you to view photos and videos. But that\’s not counting the benefits of the Radeon Vega 8 integrated into the Picasso, significantly superior to those of the UHD 620 from Intel processors. The Vega 8 is positioned at the level of an entry-level graphics card. It is therefore capable of running games that require little graphics resources.

As for the autonomy of this computer whose large format is comfortable for a mainly sedentary use (ex: at home) and whose weight contained for a 17 inch nevertheless facilitates transport, bet on about 5 hours of battery operation in light use.