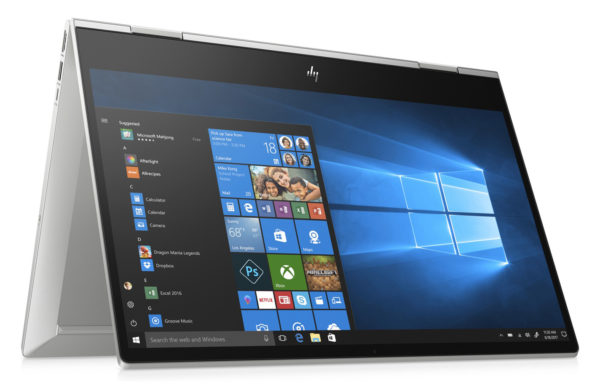 Productivity tool, the HP Envy x360 15-dr1001nf puts its convertible design, its good autonomy and its reactive heart at the service of the amateurs of office automation and light creation. Its latest-generation Intel base is well-suited for this purpose with the right amount of memory and SSD storage to navigate the system smoothly. Add to that a beautiful borderless 15.6-inch screen and many amenities like the backlit keyboard, full connectivity, a compact metal case and a keypad. Note however against its weight (2.05 kg) that can weigh at arm’s length in tablet mode. 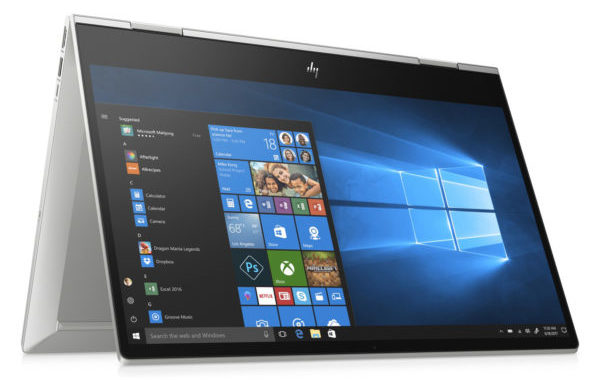 HP remains faithful to the design of the latest Envy x360 and almost nothing to that of the predecessor HP Envy x360 15-cn. We find its smooth and matte surfaces, its structured frame with projecting edges and the back of the geometric base. Here, the lid is covered with aluminum to serve the robustness and finishes are treated elsewhere for a perceived quality satisfactory. The HP Envy x360 15-dr1001nf inherits a fully silvered aesthetic and preserves most of the chrome details that adorned its predecessor. The result can not be more sober but remains very neat, especially with the white backlight of the keyboard that reveals the clear keys in the dark

Its measurements are almost unchanged if it is the thickness that increases 2 mm and the weight reduced to 2 kg on this declination without hard disk.

The screen of the HP Envy x360 15-dr1001nf is highlighted by micro-borders engaging in a satisfactory level of immersion. Especially since it is installed on an IPS panel to legibly discern the information displayed regardless of your angle of approach. The definition is extended with Full HD (1920 x 1080 px) and offers the best of your High Definition content. Moreover, the presence of touch involves the use of a glossy surface whose aesthetic attractions can not offset its discomfort in bright environment (appearance of reflections). There is no stylus provided with this model.

Distributed on each side of the chassis, the connection is pleasantly varied. There is an HDMI 2.0 output, an SD card reader and three USB 3.1 ports so a USB Type-C (Gen1, DP 1.2 video support). The wireless modules last generation Wifi AC and Bluetooth 5.0 are also on the menu and a fingerprint reader to authenticate quickly to Windows. It is also observed that wide vents appear on the sides of the PC, it is often good sign for performance.

The heart of the PC is powered by a Comet Lake 10th generation (2019) processor , a Core i5-10210U . The gain is not significant compared to the 9th generation Core i5-8265U (Whiskey Lake), nor even noticeable in practice. Anyway, the Envy will leave no work aside and will cover all common usage (Web browsing, Office processing, video) with a fairly sharp mastery in more demanding applications, drawing in the multicore architecture (video editing, Photoshop …). With 8 GB of RAM behind, the system will not lose fluidity in multitasking.

Storage is another highlight on this ultrabook. It is entrusted to a 256 GB NVMe PCIe SSD which will significantly increase the overall responsiveness of the system on a daily basis. Based on a PCIe interface faster than SATA3, the SSD provides shortened load times, a virtually instantaneous Windows launch and very fast file copies. Only downside, its capacity will quickly prove to be insufficient if you wish to archive heavy files or games.

Last but not least, the autonomy benefits from a slightly boosted battery (from 52.5 Whr on the 15-cn to 55.67 Whr here) which should allow the ultrabook to reach 9 hours of battery life in current use. It recharges at 50% of its capacity in 45 minutes. 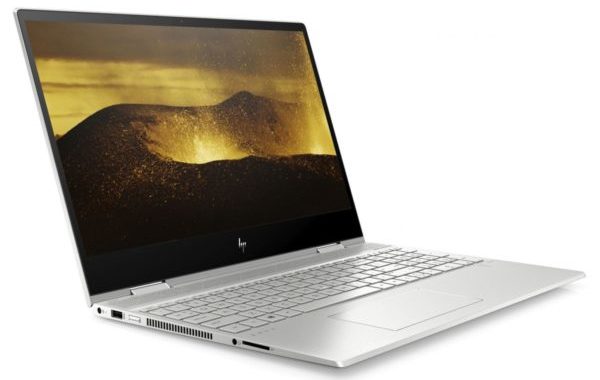