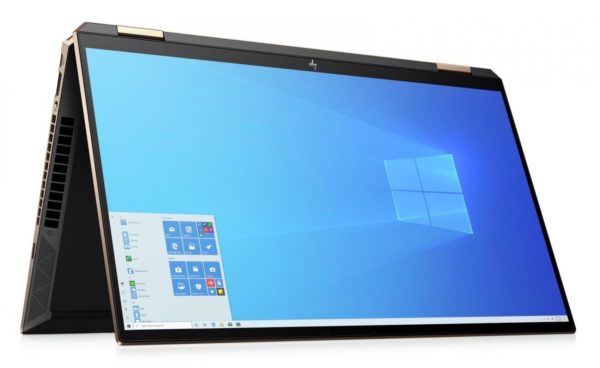 Multimedia performance, modular format and ultra-high definition, all within a single PC: the HP Specter x360 15-eb0000nf. Capable of supporting the majority of user requirements in a common profile, its core bet on low power with a 10th generation Core i7 Quad Core to preserve battery life, noise and capacity in such a slim chassis . Also, memory and storage are present in quantity (16 GB RAM and 512 GB SSD), the 4K screen is revealed by thin borders, the high-end chassis includes a TB3 connector and the autonomy can give you a glimpse of up to ‘at 9 hours of uninterrupted work. Note, however, that its weight and size are not the most comfortable in tablet mode.

The HP Specter x360 15-eb0000nf retains all the fundamentals of the Specter line and changes almost nothing to its recipe initiated on the 2019 model (Specter x360 15-df). The characteristic design still receives sharp and pointed copper edges with the two rear angles “cut” which serve to accommodate a USB-C on one side and the Power button on the other. It may seem anecdotal but this positioning makes it possible to find the connection in question very easily. HP still surrounds it with a unibody (monocoque) body in matt CNC aluminum alloy over the entire shell, embellished with a Poseidon blue color that tends towards black. It’s elegant, a little flashy but sober overall.

The ultrabook is compacted by a few precious millimeters with a 359.9 x 226 mm format against 361 x 250 mm on the 15-df. This compaction is visible at the level of the upper and lower edges of the screen which are much thinner. The thickness does not move and remains under 20 mm while the weight nibbles a few grams (especially on the weight of the battery) to drop to 1.92 kg . It may be anecdotal but faced with the 2.2 kg of the previous model, the difference should be felt at arm’s length. Overall, we stay on a compact 15-inch capable of following you on your travels if necessary.

The hinge mechanism has also been slightly revised to offer optimized resistance in order to switch smoothly between all modes of use. Because the particularity of its x360 configuration is found in its 360 degree rotating hinges which allow the screen to switch on either side of the base for traditional use, in computer mode, or more original, in tent mode, easel or tablet.

Next, let’s take a look at the screen which is one of the rewarding elements of this HP Specter x360 15-eb0000nf. It reveals a bright IPS panel (400 nits) with 100% sRGB colorimetry. Surrounded by a borderless frame, the screen also offers an Ultra HD definition (3840 x 2160 pixels) which delivers a sharper image in all circumstances, whether you are looking to modulate the display (juxtaposed windows), to enlarge the characters or to view content in Very High Definition. Finally, the screen is covered with a layer of very resistant Gorilla Glass against impact that HP advertises as “anti-reflective”. We have some reservations about this name which should not work miracles other than slightly limiting the reflections.

Regarding the connections, the variety and positioning of the ports do not change. The corners on the back are still occupied by a USB Type-C Gen2 port and the start button. Another USB Type-C Gen2 port is present, both Thunderbolt 3 compatible , along with a USB Type-A 3.2 port, HDMI 2.0 output, and a microSD card reader. The fingerprint reader finds its original place, isolated at the bottom right of the keyboard. The wireless modules are of the latest generation, Wifi 6 AX and Bluetooth 5.0 and the FHD webcam is infrared and is Windows Hello compatible. So you have the choice between logging in with the fingerprint or through facial recognition.

While the HP Specter x360 15 offers muscular configurations based on Comet Lake-H processor and Turing graphics cards, the model in question chooses to integrate a low-power processor and a small graphics card, in order to meet a other public content with small multimedia performances but preferring to limit heating and noise and enjoy better autonomy.

Thus, the HP Specter x360 15-eb0000nf accommodates a 10th generation Core i7-10510U Quad Core low power. Thanks to it, the Specter will not leave any routine work aside and will cover all daily use (Web browsing, Office processing, video) with a sharp mastery in more demanding applications, drawing on the multicore architecture. (video editing, a bit of Photoshop …). We remain on low consumption that said, so we can not consider making creation its main use because the processor will quickly show its limits with slowness in complex calculations. In addition, with 16 GB of RAM behind, multitasking will be royal.

Graphics processing a little too greedy for the Intel UHD 620 chip integrated into the processor will be able to count on the GeForce MX330 , an entry-level dedicated graphics card based on the Pascal architecture (2016). It is a requalification of the GeForce MX250 with similar performance. So do not expect more than support in everyday use and to launch a few games. The occasional player will be able for example to practice in HD (768p) on a small part of the titles of the market provided to make concessions on the sharpness of the rendering. The limits of the GPU will be quickly crossed for image processing in 4K.

Opposite, the storage is entrusted to a 512 GB M.2 NVMe PCIe SSD which will bring a welcome dose of responsiveness to the system. Compared to a standard mechanical hard drive, is is quieter, more robust and energy efficient, and allows Windows to achieve remarkable fluidity with short load times and zero latency execution. What’s more, its capacity is nothing short of ridiculous and can accommodate a good chunk of your game library although some may not find it sufficient.

Finally, the battery capacity which seems limited for the powerful configuration is welcome here with 72.9 Whr. Despite the energy-intensive side of the 4K screen, you should be able to count on around 9 hours of autonomy in web browsing with active Wifi (without GPU operation). 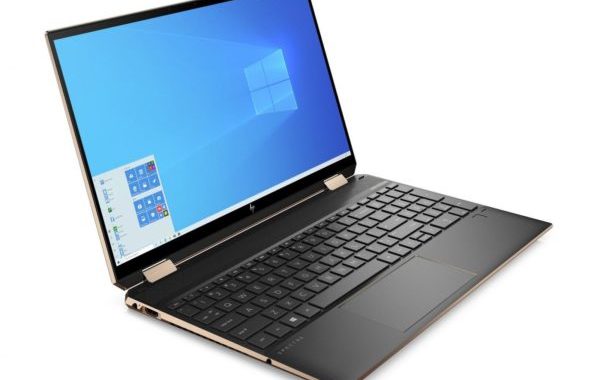