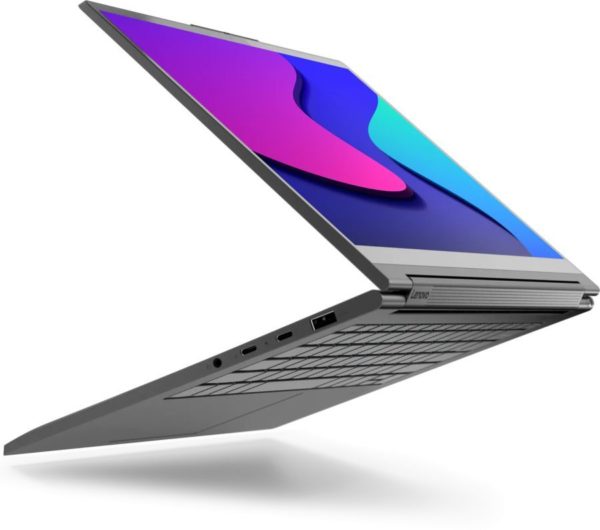 Lenovo Yoga C940-14IIL, a convertible ultrabook 14-inch tablet that ticks all the boxes of the high-end with its premium metal chassis, its beautiful screen, its satisfactory autonomy and its many amenities. But the real plus of this series lies mainly on the processor part that gains significantly in power compared to the previous generation, the graphics chip in mind. A weak point ? The ports are not numerous.

Here are the technical characteristics of the tested model:

Lenovo has chosen to work overhauling its Yoga C 900 series in detail. In this sense, it takes all the achievements of Yoga C930 of 2018 and adjusts here and there some elements to refine the user experience. The tester has chosen to highlight the differences and improvements offered by this Yoga C940 compared to its predecessor, especially at the box and not to dwell on the characteristics common to both PCs.

In fact, the comments about the chassis, the connectors and the input devices are partly taken from the test of the previous Lenovo Yoga C930-13IKB done by the tester some time ago.

Lenovo has emphasized the rigidity and sturdiness to shape the shell of its Yoga. All aluminum, it is available in two colors: steel gray and mica (shiny cream tone). The assembly is impeccable with no void or noticeable gap between the parts and all the surfaces resist the pressure without blinking. The hinge applies the perfect resistance to tilt the screen in all directions while avoiding rebounds in portable PC mode.

The tester also notes that the design of the hinge has been changed since the Yoga C940 now has a large hinge monobloc. The stylus is still on the back of the PC, but Lenovo has slightly changed the extraction system. It must now be removed. In addition, the manufacturer has taken over the notch of the webcam seen on the Lenovo Yoga S940. Opening the screen is a little easier this way.

Connectivity is still quite limited. Fortunately, both USB-C ports support the Thunderbolt 3 and can both be used to charge the ultrabook (which also means that one of the two will be busy most of the time for power). Despite its thin profile, it also has a USB 3.1 Type-A standard size but the card reader is still not in the program, it’s a pity. A Windows Hello compatible fingerprint reader is the only security element on this Yoga C940 plus a small cache that slips in front of the webcam. The tester would have appreciated an infrared webcam.

There is no maintenance hatch on the back of this ultrabook and some screws hidden under the rubber feet. Care must also be taken to defuse the plastic clips on the back.

The backlit chiclet keyboard is still as qualitative. The concave keys are comfortable and wide, well suited to prolific writers. A white two-level backlight is available, allowing it to be used in total darkness. The striking stroke is quite short and accompanied by a separate actuation point that could have been firmer. Good size, the touchpad allows good finger navigation in multi-touch gestures but the tester has detected areas on the edges somewhat imprecise and slow to react. It’s a safe bet that this will not cause a problem of everyday use. The two integrated mouse buttons are nice and accurate. The Yoga C940 comes with a touch panel of 14.

Lenovo offers it with two screens to choose from, both based on an LCD IPS touch-sensitive multi-touch glass panel with HDR support. In premium option, there is a 4K UHD screen (3840 x 2160) offering a brightness of 500 cd / m² and an extensive colorimetry. The model in test inherits from the standard option, a full HD screen (1920 x 1080 pixels) with a brightness measured at 363 cd / m². It’s brighter than the Yoga C930 but the WUXGA LCD screen of the new XPS 13 2-in-1 is a lot brighter.

The contrast ratio of 2259: 1 is excellent and better than any of its competitors. Color reproduction is also very good (97% sRGB, 62% AdobeRGB, Delta E less than 4) and can be improved by activating HDR in some applications.

Despite its shiny surface, the Yoga C940 can be used outdoors because the screen is bright enough, provided you stay in the shade of course.

The model tested inherits the combo i7 / 16 GB RAM / SSD 512 GB, what to finally get an idea on the most powerful Ice Lake processors engraved in 10 nm.

Note that by default, the Lenovo Yoga runs in a mode “Intelligent Cooling”. This feature of the Lenovo Vantage app dynamically regulates performance to optimize temperatures and noise. In fact, the CPU frequencies are slightly lower than they might be. It is possible to disable this mode and activate the performance mode which changes the game significantly. Anyway, we notice that the Core i7 Ice Lake gains almost 30% in power compared to its predecessor (Core i7-8565U) on most of the scenario and manages to maintain better frequencies in the duration that the Dell XPS 13 7390 2-in-1. Of course, the system is perfectly fluid, latency-free and functional thanks to the amount of RAM and fast SSD in place.

Now let’s take a look at the Iris Plus G7 graphics, the fastest chipset built into the latest Intel Ice Lake processors. Integrated, it does not have its own dedicated memory and therefore depends on the memory of the system which ideally must operate in dual channel mode to optimize the performance of the iGPU. Fortunately, this is the case on the Lenovo Yoga C940.

The gain compared to an Intel UHD Graphics 620 is significant, so the Iris G7 can quite deal with some modern games, even if the graphic details need to be significantly reduced. In terms of pure GPU performance, it is still a bit slower than an NVIDIA GeForce MX250, although the difference is not huge.

Question noise, the Lenovo Yoga C940-14IIL is very discreet. The fan is idle in idle and is not much more noticeable when the work strengthens with 33 dB in the demanding test phase. Unfortunately, the tester detected a bit of “coil whine” on his model, discernable only with the ear pressed against the keyboard however.

When the Intelligent Cooling Mode is activated, the chassis does not exceed 44 ° C with the perfectly cold wrist rests.

The Lenovo Yoga C940-14IIL battery 60 Whr gives it a 10-hour battery life in Web browsing with active Wifi and brightness at 150 cd / m². Boost the brightness as much as possible and the battery life is around 7:30.