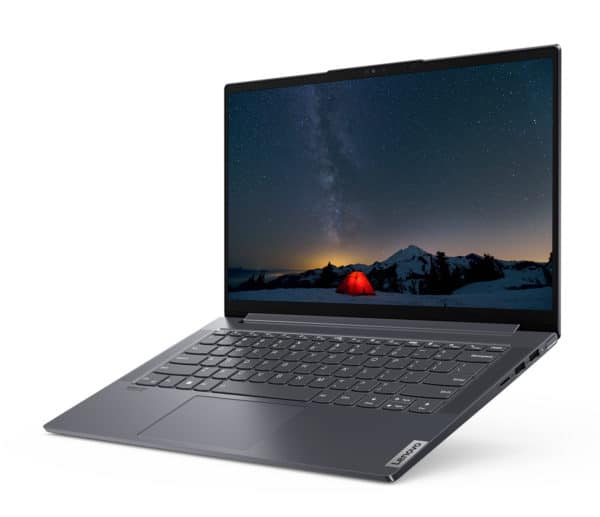 Compact and light but frighteningly powerful, the Lenovo Yoga Yoga Slim 7 14ARE05 (82A20018FR) is a 14-inch ultrabook that has something for everyone. Placed in a slate blue metal case, it is the multimedia tool par excellence with its state-of-the-art Ryzen 7 Octo Core processor and its integrated Vega 7 graphics solution, its fast 1 TB SSD storage with 16 GB of RAM (4266 Mhz ) and its bright and bright borderless screen. In addition to the main architecture, it uses artificial intelligence to make your life easier, works for a day without faltering and provides a variety of connections supplemented by the latest Wifi 6 (ax). On the other hand, it will be necessary to compose with a welded RAM and with a reflective screen. 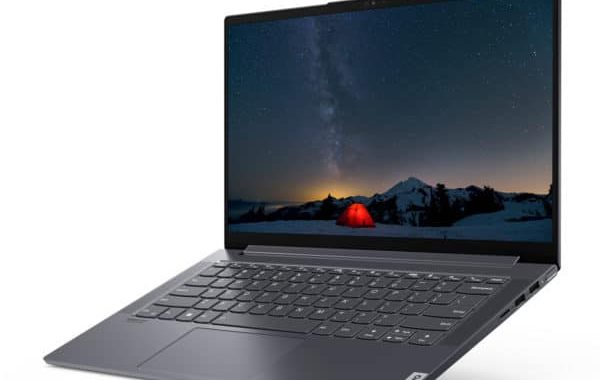 Forged in aluminum , the Lenovo Yoga Slim 7 14ARE05 (82A2001XFR) aims above all to be sober, versatile and robust with a frosted high-end finish. Its color “Slate Gray” changes from gray or silver with a tint that draws towards deep blue. The surfaces are soft, smooth and matt and do not catch fingerprints for a simple look, without any flashy element, ideal for slipping into a professional environment.

Measurements side, the 14 inch optimizes its format with 15 mm thickness for a frame of 320 x 208 mm around a borderless screen and 1.4 kg on the scale for this version with glass screen.

Besides, the design element that steals the show from the chassis is probably the screen. Its bright IPS panel (300 nits) reveals a Full HD definition (1920 x 1080 px) which allows you to make the most of High Definition content. A layer of glass is placed on the screen, bringing a little more clarity to the content but with the appearance of reflections caused by the ambient light, a detail that could annoy some. Interesting detail, the screen opens flat on 180 degrees to install it comfortably on the knees for example, or slide it under an external screen.

Connections meanwhile in the variety despite the small profile of the machine. Lenovo adds to its Yoga Slim 7 14ARE05 an HD infrared webcam with Windows Hello facial recognition and a long range microphone for the use of Amazon Alexa and Windows Cortana assistants. No need for a fingerprint reader, the session opens on its own, without touching anything. The interfaces as such include two USB Type-C portsincluding a Gen2 which supports charging, video and data streams as well as two standard USB 3.2 Gen1 ports. But that\’s not all. A microSD card reader also responds, as does an HDMI 2.0 output. It\’s pretty generous compared to the competition now. Note also that Lenovo equips this model with the latest Wifi module to date (Wifi 6 ax) . Bluetooth 5.0 is of course on the menu.

To enhance the user experience, Lenovo leverages artificial intelligence . Stay away from your computer and the video you watch is automatically paused, transfer content from your screen to another monitor, just by turning your head, and much more. Lenovo\’s AI should also facilitate authentication and translation while extending autonomy by optimizing performance according to usage habits. 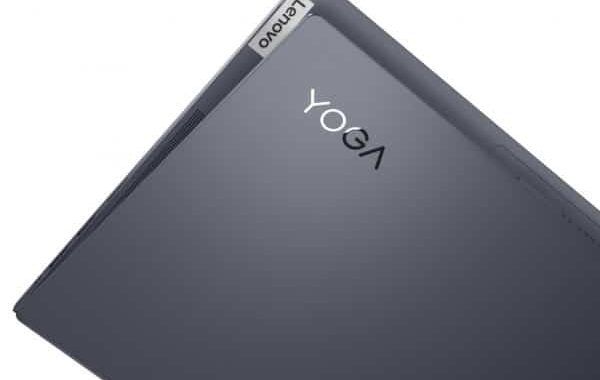 The great strength of the Lenovo Yoga Slim 7 14ARE05 (82A2001XFR) is to look at the processor department with the support of an AMD Ryzen Renoir (2020) Ryzen 7 4700U Octo Corelow consumption. This shows a nice increase in performance compared to the Ryzen 7 3700U (2019), thanks in particular to the number of cores which doubles but also to the finer engraving used. Without going too far (the processor is recent), for all common office type uses, we can say that we can obtain scores close to an Intel Core i7-1065G7 but the difference is more visible on tasks that consume processor resources that will be able to take advantage of all hearts such as the creation of content (editing, rendering, modeling …). Note that we stay on low consumption (TDP 15W), so do not expect from this processor the same resources as an Octo Core-H (Ryzen 7 4800H) which is a processor designed for complex calculations deepened.

Opposite, the 16 GB RAM is a strength to enjoy comfortable multitasking whatever your use and to look forward to the years to come. It is a good thing that the total is quite high because the RAM is soldered and therefore not scalable.

The Yoga Slim 7 is not intended to play but the Radeon Vega 7integrated into the processor is not against some occasional parts. At the level of an NVIDIA GeForce MX330, its capacities are more than enough for everyday work and the tasks listed above and even allow a few games from time to time on games that are not very demanding graphically. Most will require making some concessions on screen definition and / or details however. Especially since the processor is forced to make some concessions on its power in this case (reduced TDP), due to the compactness of the chassis. This means that you will not be able to take full advantage of the potential of the components but that the set will still allow you to play and create in good conditions, a bargain already for the price.

Opposite, storage is elementary here since it is entrusted to a fast dedicated SSD of 1 TB (NVMe PCIe) . The system benefits directly compared to a configuration with mechanical hard drive because of the speed of loading offered by the SSD. This type of storage ensures almost instantaneous on and off phases, transfers calculated in seconds or instant software launches where the mechanical support involved substantial latencies. Note also that the SSD is inherently quieter, more robust and efficient than a hard drive. And if it is often tackled for its too low storage capacity, it is not the case here since it provides 1 TB, enough to allow the

A word on autonomy finally. Despite its small profile, Lenovo still managed to slip into its case a 60.7 Whr battery, allowing it to be self-sufficient for almost 9 hours . A force to take it with you for a whole day. In addition, RapidCharge technology allows you to power up to 80% of the battery capacity in just one hour. 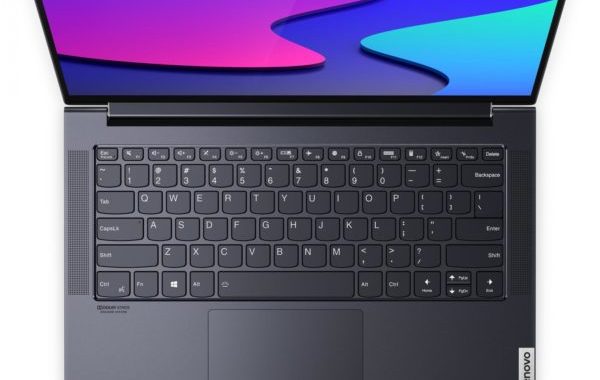