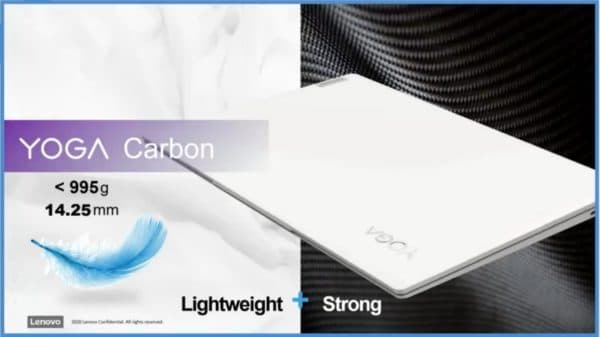 On the web is revealed the Lenovo Yoga Carbon, a new very light Ultrabook of less than 1Kg equipped with an Intel Tiger Lake processor and offering a autonomy of 16 hours.

At least that”s what a video from the Lenovo Yoga Carbon that filters on the web suggests and shared by WalkingCat .

You can see an Ultrabook called Lenovo Yoga Carbon weighing less than 995 grams for a thickness limited to 14.25mm .

With a carbon fiber chassis , it is adorned with a white design and a 13 inch screen 100% sRGB Dolby Vision in 16 / 10th format with a definition of 2560 x 1600 with glass protection and reduction of blue light.

Still on the screen, Lenovo offers a data protection solution by blurring the screen when the user moves away from it , in order to discourage prying eyes.

In view of its thickness and lightness, no dedicated graphics card on board. Its absence would somewhat compensate however by the integrated processor, an Intel Core 11th generation .

We therefore think of an Intel low consumption Tiger Lake engraved in 10nm.

For Notebookcheck, it could be the Core i7-1165G7 whose reference suggests graphics performance at least up to the Intel Iris Plus Graphics G7 that we tested . In any case, the integrated Tiger Lake would consume less energy than the average, then either it is a Tiger Lake U whose TDP is configured at the lowest, or a Tiger Lake Y (more economical and less efficient). 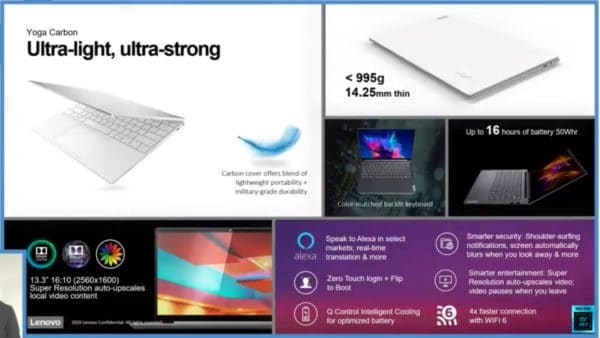 The new Lenovo Yoga Carbon ultraportable also offers an announced autonomy of 16 hours in Windows 10 (Pro) with its 50Whr battery. It also announces itself with the Amazon Alexa voice assistant .

It remains to wait for a more official communication from the brand around its Lenovo Yoga Carbon to learn more about it, both in terms of configuration, release date and price.