Original by its 30% recycled plastic chassis, the Acer Aspire Vero AV15-51-51EG is one of the very first laptops to be available under Windows 11. This versatile Ultrabook with 15 inch Full HD IPS anti-glare screen is powerful in current use thanks to its 16 GB of RAM and its Quad Core i5-1155G7 Tiger Lake processor with Iris Xe graphics capable of supporting games that are not too greedy. Equipped with a fast 512 GB SSD storage which reinforces its responsiveness, this thin and light gray laptop PC is also equipped with a backlit keyboard, a fingerprint reader or even connectivity with Wi-Fi ax and USB-C.

This versatile Ultrabook features an original speckled gray design with its frame made from 30% recycled plastic .

Thin and light, this laptop PC is equipped with good connectivity with its USB-C, its wireless Wi-Fi ax modules ( more recent and efficient than Wi-Fi ac ) and Bluetooth 5.1 for connections and communications to distance, its practical HDMI video output for easy connection to a TV or monitor for example, its Ethernet and audio ports or even its 3 USBs all compatible with both USB 2.0 and USB 3.0, the USB 3.0 guaranteeing transfers up to 10 times faster than USB 2.0 when connecting USB 3.0 peripherals.

Via Windows Hello technology, you can authenticate yourself on the system by biometric recognition thanks to the integrated fingerprint reader.

The chiclet keyboard is adorned with a backlighting system expected and always appreciable to better distinguish its keys in case of reduced ambient light. 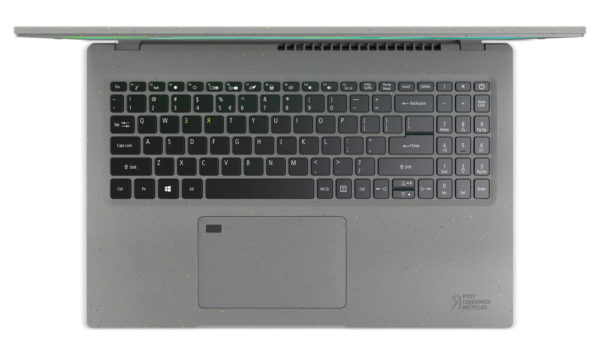 For its part, the screen with thin edges lends itself well to the display of High Definition content such as videos due to its precise Full HD definition and its 16: 9 aspect ratio. Thanks to its IPS technology, it also has significant viewing angles, both horizontally and vertically. As a bonus, as it is anti-reflective, the screen is more readable than a shiny panel in a bright environment (eg outdoors).
The blue light that the screen emits is also attenuated by up to 30% by Acer Bluelight Shield technology.

The Acer Aspire Vero AV15-51-51EG is a thin and light 15-inch High Definition laptop designed for general-purpose mobile use.

In its recycled plastic chassis, it houses a good amount of 16 GB RAM coupled to an Intel Tiger Lake-H Quad Core i5-1155G7 processor with a TDP of 28W allowing for more power compared to the 15W editions.

The general performance provided by this core is able to satisfy many users. However, to often carry out heavy work in terms of processor and / or graphics resources, it is better to turn to a PC based on a non-low consumption processor and / or a suitable dedicated graphics card.

In any case, many people will appreciate being able to watch photos and videos but also play titles that are not too demanding in terms of graphics resources on this thin and light laptop PC, while it does not have a dedicated graphics card on board.

But it takes advantage of the Iris Xe (tested by us) , a graphics solution integrated into the Quad Core i5 Tiger Lake, the performance of which is clearly superior to those of the classic Intel UHD 620. 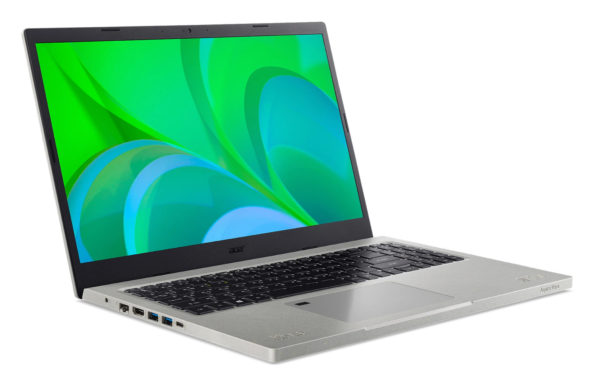 The storage is entrusted to a 512 GB SSD, a capacity similar to the standard of hard disks. However compared to the latter, an SSD offers several advantages: silent operation, greater robustness, lower power consumption and higher speed.

In practice, the SSD guarantees much better responsiveness and fluidity on a daily basis than a simple hard drive. This implies in particular much faster starts / stops, processing and launches of applications, or even a faster arrival on the cards of online games.

Fairly easy to transport due to its thinness and controlled weight, this versatile Ultrabook is not, however, the most nomadic there is. In terms of battery life, expect around 6 hours of battery operation in light use, particularly because of the 28W TDP of the processor.