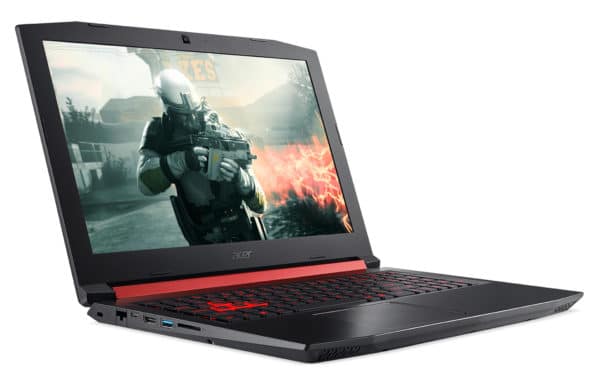 Powerful and game-oriented, the Acer Nitro 5 AN515-43-R68J is a new versatile black laptop with 15-inch IPS Full HD anti-glare screen that improves fluidity in games with its 120Hz frequency. Capable of running a number of games thanks to its GeForce GTX 1050 Ti graphics card, it is efficient thanks to its Ryzen 5 3550H Picasso AMD Quad Core processor and its good amount of RAM. In addition, it is very responsive thanks to its fast SSD storage and has a USB 3.1 Type-C connection as well as a backlit chiclet keyboard.

It sports a clearly gamer design with its black brushed metal finish chassis with angular lines and touches of red.

This computer is well equipped in terms of connectivity with its USB 3.1 Type-C, its wireless Wi-Fi ac and Bluetooth 4.1 modules for remote connections and communications, its HDMI video output useful for easily connecting it to a monitor or a TV for example, its audio and Ethernet ports as well as its 3 USB all compatible with both USB 2.0 and USB 3.0, USB 3.0 guaranteeing transfers made up to 10 times faster than USB 2.0 if connects USB 3.0 devices to it.

Good point, a backlight system equips the chiclet keyboard which is practical to distinguish its keys in case of limited ambient light.

Thanks to its frequency of 120Hz, the screen reinforces the fluidity in games compared to the standard 60Hz. IPS, it offers a more accurate than average colorimetry with comfortable vertical and horizontal viewing angles. As it is anti-reflective, the screen is more readable in a bright environment (eg outside) than a glossy screen. In addition, it lends itself well to the display of High Definition content and in particular videos due to its 16: 9 format.

The Acer Nitro 5 AN515-43-R68J is a 15-inch High Definition portable PC performing in a versatile use and oriented games.

It is indeed capable of running a good number of games as long as one is ready to make concessions under titles demanding in graphic resources because it takes advantage of the dedicated GeForce GTX 1050 Ti card from NVIDIA.

An essential parameter in games, responsiveness is essential with this PC, in particular because it is equipped with SSD storage. As a reminder, an SSD is much faster than a hard drive but also less energy-consuming, more shock-resistant and quieter.

Thanks to the SSD, this computer is clearly more responsive and fluid than if it were based on a simple hard drive. We take advantage of, for example, much faster start / stop and launch of applications, but also a faster arrival on the cards of online games.
Here, the SSD competes with hard disks in terms of capacity thanks to its 512 GB but if that turns out to be too fair, we can always use an external storage unit. Opting for a USB 3.0 device is therefore an interesting solution for obtaining fast transfers.
In addition, the Acer AN515-43 incorporates 2 storage slots: 1 in M.2 format and 1 in 2.5 inch format. We can therefore add a second SSD or a hard drive to this PC.

The heart of this computer is up to the task, supporting the GTX 1050 Ti well in games. Composed of an AMD APU (Accelerated Processing Unit) Ryzen 5 3550H Quad Core Picasso processor and 8 GB of RAM, it delivers good general performance capable of satisfying many users.

As for the autonomy of this computer which heats up and makes itself heard when it is heavily used (but this remains under control) and is relatively discreet in current use, bet on about 5 hours of battery operation in light use.