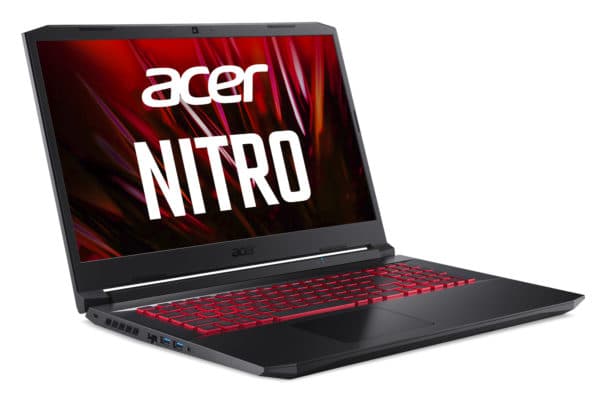 Versatile, the black Acer Nitro 5 AN517-54-59JX laptop designed for gaming and creating in Windows 11 with a 17-inch IPS Full HD anti-glare display whose frequency of 144Hz improves smoothness in games takes advantage of fast SSD storage that reinforces its responsiveness. This designer-oriented gaming laptop PC is powerful thanks to its Hexa Core i5-11400H Tiger Lake-H processor and its 16 GB of RAM which accelerates multimedia processing. This is also the case with the GeForce RTX 3050 ray tracing NVIDIA Ampere graphics card capable of supporting a number of games. This versatile laptop geared towards gamers and creatives also benefits from a backlit chiclet keyboard as well as USB-C and Wi-Fi ax connectivity. 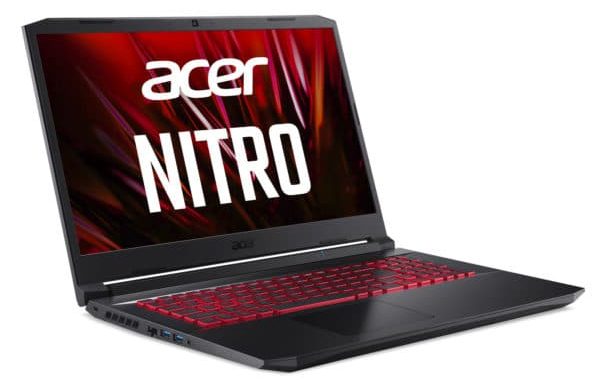 It adopts gamer codes in terms of design with its angular lines, its black color and its touches of red.

CoolBoost technology takes care of cooling it using 2 fans, heat pipes and air vents. Thanks to the NitroSense application, it is possible to control the temperature and the speed of the fans.

This designer-oriented gaming laptop PC integrates good connectivity made up of wireless Bluetooth 5.2 and Wi-Fi ax modules ( more recent and efficient than Wi-Fi ac ) to communicate and connect remotely, a practical HDMI video output to easily connect it to a TV or monitor for example, Ethernet and audio ports, 1 USB-C but also 3 USB 3.0 (USB 2.0 compatible) guaranteeing transfers made up to 10 times faster than USB 2.0 if USB 3.0 devices are connected to it.

The chiclet keyboard can obviously be backlit, which is very practical so that you can better distinguish its keys in a dimly lit environment. 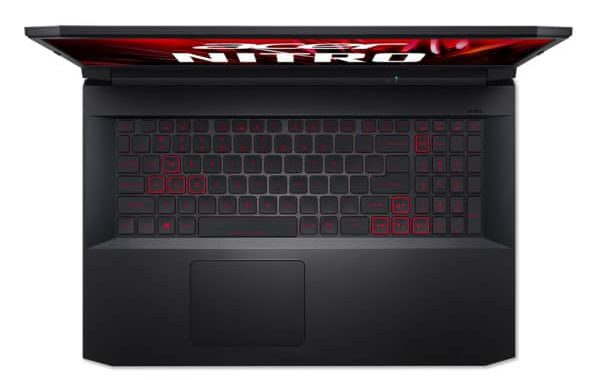 To appeal to gamers, the screen adopts a frequency of 144Hz higher than the standard 60Hz to improve fluidity in games. The screen is also very suitable for displaying videos and more generally High Definition content because it adopts a 16: 9 format associated with Full HD definition. Thanks to its anti-reflective coating, the screen also offers better visibility in a bright environment (eg outdoors) than a shiny panel while being more restful for the eyes in prolonged use. As a bonus, the screen is equipped with IPS technology guaranteeing colors more faithful than the average as well as important viewing angles, both horizontally and vertically.

The Acer Nitro 5 AN517-54-59JX is for those looking for a versatile 17-inch laptop that performs well with a creative and gaming focus.

Whether it is with the Iris Xe graphics part integrated into the processor or the dedicated GeForce RTX 3050 card, it is possible to watch photos and videos on this versatile multimedia laptop equipped with NVIDIA Optimus technology.

More powerful and greedy than the Iris Xe, the GeForce RTX 3050 is able to support many games as long as one is ready to make concessions under titles demanding in graphic resources to obtain a good fluidity.

The Iris Xe takes its place within the Hexa Core i5-11400H, an Intel Tiger Lake-H processor which provides solid general performance capable of satisfying a maximum of users, especially since it is associated with a good amount of 16 GB RAM.

If the contribution of the Hexa Core is currently variable in games compared to a Quad Core, this core supports the GeForce RTX 3050 well in games.
It also guarantees much faster processing than a Quad Core and 8 GB DDR4, the difference being particularly noticeable in areas consuming CPU and RAM resources taking advantage of multicore, which is the case for example in photo editing, video editing. or 3d rendering.

Built around an Intel HM570 chipset, the heart of this versatile multimedia laptop designed to play and create is associated with SSD storage.

This clearly reinforces the responsiveness and fluidity on a daily basis compared to a simple hard drive.
It must be said that an SSD is silent but also more energy efficient than a hard drive, more resistant to shocks and much faster.

In practice, the SSD notably guarantees much faster starts / stops, treatments and launches of games / software or even faster arrival on the cards of online games. 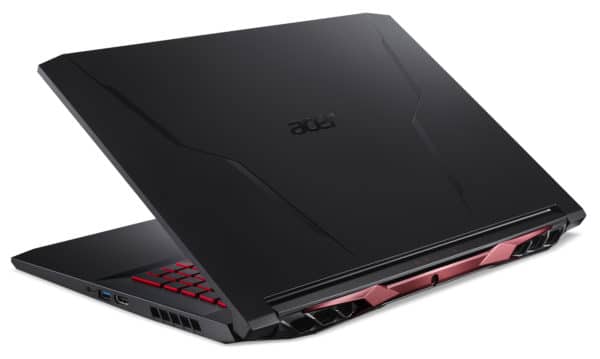 Here we find an SSD with a capacity of 512 GB corresponds to what hard disks offer as standard. However, if you need more space, you can rely on an external storage unit. Opting for a USB 3.0 / USB-C device then represents an interesting solution to benefit from fast transfers.

Finally on the autonomy side, bet on about 6 hours of battery operation in light use for this computer which is not the most easily transportable because of its large format which is however particularly comfortable in the context of predominantly sedentary use. (ex: at home).
Either way, expect that when pushed hard (ex: treatments, games), this versatile laptop designed to play and create will sound and heat up.