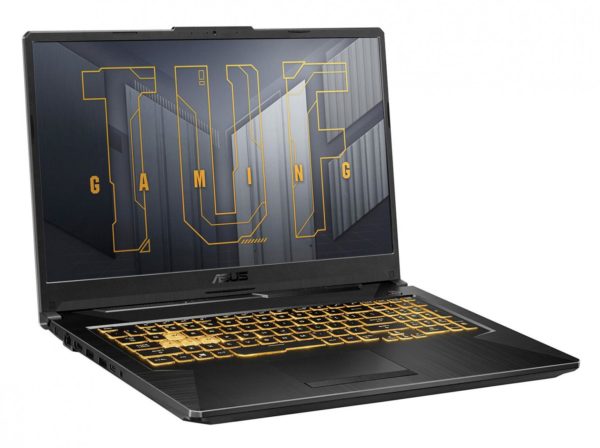 Provided with a very decent battery life for a 17-inch gamer, the Asus A17 TUF766QM-HX020T is a sturdy laptop PC that can also turn into a versatile work tool if needed. It contains a major processor capable of propelling it towards advanced versatile spheres and destined for creatives as well as gamers, the AMD Ryzen 7 5800H Cezanne Octo Core. Gamers will find high-end support in the GeForce RTX 3060 and the 144Hz IPS FreeSync screen, especially as these key components are supported by 512 GB SSD storage and 16 GB of RAM for speed. system and complemented by amenities like the backlit keyboard with multicolored key or easy access to components but expect to see temperatures and noise increase in game, and not just in game. 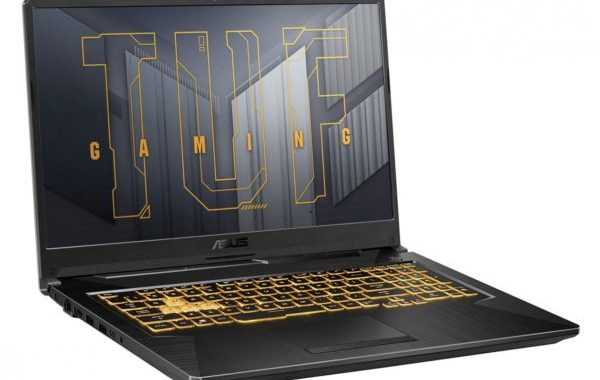 Specifications of the Asus Gaming A17 TUF766QM-HX020T

Chassis, connectors, screen of the Asus TUF Gaming A17 TUF766QM-HX020T

Asus is giving its TUF line a little facelift, which broadly retains the aesthetic achievements of the TUF705 / TUF765 from last year. This design between sobriety and intimidation updates a structured shell with steep angles and a few touches of color (lighting). The case is entirely black (anthracite) with a design element screen-printed on the back of the cover for a discreet look without really being so. Inside, the difference between the two models is not striking with the same geometric design dividing a brushed effect and a smooth effect on the sides of the keyboard. The frame is made from polycarbonate with the localized use of metallic finish metal on the back of the cover.

In this regard, Asus has developed its TUF line by taking robustness and durability as a common thread. The Asus Gaming A17 TUF766QM-HX020T thus meets the military standard MIL-STD-810G for foolproof strength (extreme heat, shock, drop, humidity, altitude, exposure to the sun). The keyboard has been reworked with this in mind, with an estimated lifespan of 20 million keystrokes for each key. It sports multi-color backlighting per key with underlined ZQSD keys (transparent).

Let’s talk about measurements now. Asus doesn’t play the card of compaction at all costs, which leaves some room for components to breathe. Despite everything, it is rather well optimized for a 17 inches with a format (399 x 268 mm) and a thickness of 26 mm. The weight is 2.6 kg on the scale.

The screen is applied to a 17.3-inch bright Full HD IPS matte panel with 144Hz refresh, enough to enjoy a vivid rendering in action. Following the trend, he opts for an immersive edge-to-edge side design, a feeling amplified by the IPS panel and its wide viewing angles. In addition, the Full HD definition (1920 x 1080 px) is the most suitable for gamers and allows you to get the best out of your High Definition content while the anti-reflective treatment prevents ambient light from being reflected on the screen, improving playing comfort (especially in dark scenes).

The connection is also getting an update, and that’s not a luxury. We highlight in particular the arrival of a USB Type-C Gen2 port in the TUF series, added to the three USB 3.2 ports. An HDMI 2.0 output, a Gigabit Ethernet port and a headphone jack complete the selection mainly gathered on the left side of the PC. The SD card reader is still not on the program but the wireless modules are state-of-the-art (Wifi ax and Bluetooth 5.2). 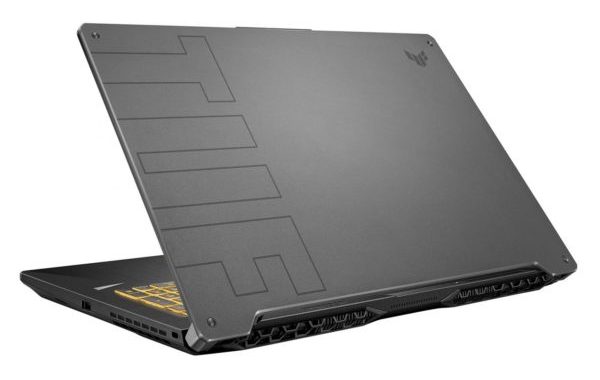 Inside the PC, there is a GeForce RTX 3060 from Ampere generation (2021). This is a high-end GPU capable of meeting the needs of demanding gamers, exceeding the capabilities of a GeForce RTX 2070 (Super) Turing. It is able to ensure a smooth quality rendering on all of the user’s favorite games, by taking advantage of Ray-Tracing on compatible games with advanced details and a respectable number of FPS. The RTX 3060 is also valuable for software that harnesses GPU computing power to speed up processing. This is for example the case in multimedia under Sony Vegas or Adobe Première / Photoshop, which will interest creators, especially with 6 GB GDDR6 of dedicated memory.

Opposite, we do not have just any processor. This is an AMD Ryzen 7 5800H Octo Core Cezanne (2021). It is only just beginning to be deployed, but its performance is already being talked about. Indeed, it delivers something to satisfy the most demanding of you with capacities close to those of an Intel Core i9-9880H Octo Core and anyway much higher than those of an Intel Hexa Core (i7 -10750H). In fact, tasks capable of using the 8 cores, such as certain content creation, 3D modeling or video editing software, will find the perfect working support here.

In support, the 16 GB of RAM ensure smooth multitasking for gaming and everyday use. It is possible to upgrade the RAM up to 32 GB.

For its part, the storage is entrusted to a 512 GB NVMe PCIe SSD which will significantly enhance the overall responsiveness of the system on a daily basis. Overall quieter, more robust and more energy efficient than a mechanical disk, it allows Windows to achieve a remarkable level of fluidity with short load times and a performance without latencies. What’s more, its capacity is nothing short of ridiculous and can accommodate a good chunk of your game library although some may not find it sufficient. In this case, you can perfectly open the PC and upgrade the components. A 2.5-inch bay is logically free inside.

Finally, Asus has visibly announced a large capacity battery on board its TUF766QM (90Whr) with an autonomy that would exceed 10 hours. We prefer to count on 8 to 9 hours of autonomy in current use during current use such as web browsing via Wifi, which is rarely achieved on a gaming PC, 17 inches moreover. 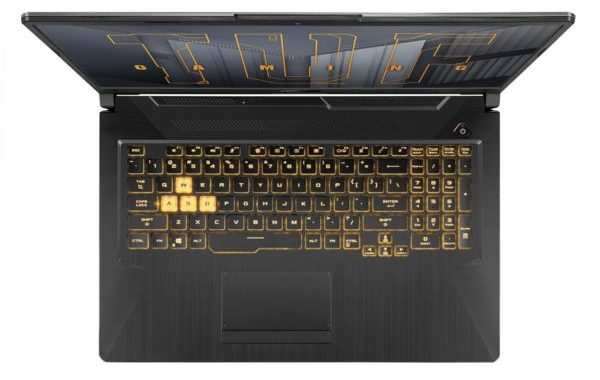