Looking for a powerful laptop to play and create? The Asus ROG Strix G15 G513QM-HN011T is capable of running recent games with its high-end NVIDIA Ampere ray tracing GeForce RTX 3060 graphics card which also speeds up multimedia processing such as the AMD Octo Core Cezanne processor and the good amount of performing RAM. Fast SSD storage boosts the responsiveness of this versatile black computer for gamers and creatives that boasts a 15-inch IPS Full HD anti-glare display with a frequency of 144Hz improves fluidity in games. RGB backlit chiclet keyboard as well as Wi-Fi ax and USB-C connectivity are also on the program for this designer-oriented gaming laptop PC, however, without a webcam. 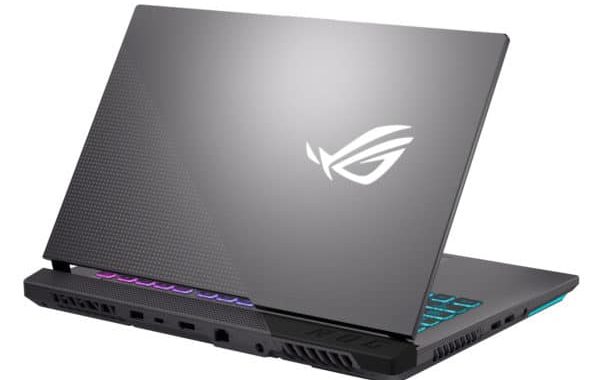 It has a relatively elegant look for a laptop PC which it nevertheless adopts the codes with its black design with angular lines. But it does not have a webcam and to take advantage of this feature, it is therefore necessary to use an external webcam.

It is cooled by 2 Arc Flow fans (84 blades), heat pipes and aeration grids.

The connectivity built into this laptop designed to play and create is good, including 1 USB-C, Bluetooth 5.0 wireless modules and Wi-Fi ax ( newer and efficient than Wi-Fi ac ) to communicate and connect remote, a practical HDMI video output to easily connect this PC to a TV or monitor for example, Ethernet and audio ports as well as 3 USB 3.0 (USB 2.0 compatible) guaranteeing transfers carried out up to 10 times faster than USB 2.0 if USB 3.0 devices are connected to it.

On the right of the chiclet keyboard, we note the absence of a numeric keypad, however standard in 15 inches. Asus could have offered its NumberPad (NumPad) technology to convert the touchpad into a touchscreen numeric keypad, but didn’t make that choice here.
In any case, we can obviously backlight the keys of the chiclet keyboard, here with an RGB solution per key, to clearly see it in the dark. 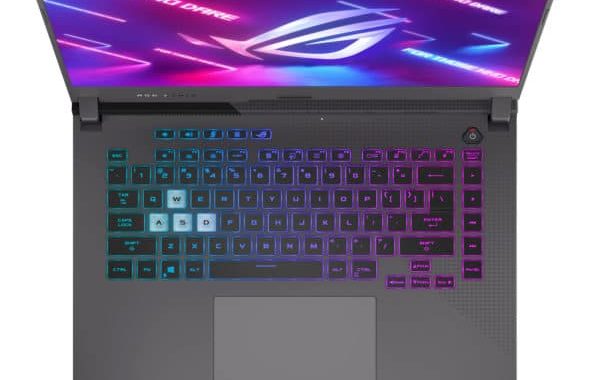 Thanks to its frequency of 144Hz, the screen enhances fluidity in games compared to the 60Hz standard. With its precise Full HD definition and 16: 9 aspect ratio, the screen is also very suitable for displaying High Definition content such as videos. As it is anti-reflective, the screen also offers better visibility in a bright environment (eg outdoors) than a shiny panel. It also adopts IPS technology ensuring large viewing angles, both horizontal and vertical, but its colorimetry is standard, lower than that of a more high-end IPS panel.

The Asus ROG Strix G15 G513QM-HN011T is for those looking for a versatile 15-inch laptop PC with a gaming and creative focus.

In addition to software using GPU computing power, such as Adobe Photoshop / Premiere or Sony Vegas, the GeForce RTX 3060 accelerates processing which will delight creative people.

Optimus gives maximum preference to the Radeon Vega 8 solution integrated into the processor despite its very modest performance in comparison (higher, however, than those of the UHD 630 of Intel processors) because it is energy efficient and therefore promotes battery life.
In this area, bet on about 7 hours of battery operation in light use.

In fact, the GeForce RTX 3060 is activated by Optimus to perform graphics processing considered too heavy for the Radeon Vega 8, both of course allowing photos and videos to be viewed.

This heart delivers a global power capable of seducing demanding users, whether they are players or creators.
They will particularly appreciate that these components provide much faster processing than a Quad / Hexa Core processor and 8 GB DDR4. The difference is particularly noticeable in work requiring CPU and RAM resources taking advantage of multicore, such as 3D rendering, video editing or photo editing.

In games, under treatment and more generally on a daily basis, the integrated SSD storage enhances fluidity and responsiveness.

Thus, thanks to the SSD, we obtain much faster processing as well as starting / stopping and launching games / software, or even a faster arrival on the cards of online games compared to a simple hard drive.

Compared to the latter, remember that an SSD is much faster while being more energy efficient, more resistant to shocks and silent.

Here we find a 512 GB SSD, a capacity in phase with the standard of hard disks. However, if you need more space, you can add a second SSD via the free M.2 slot. You can of course also rely on an external storage unit. Opting for a USB 3.0 / USB-C device then represents an interesting solution to benefit from fast transfers.

Finally, when it is strongly pushed (eg: games, treatments), this designer-oriented gaming laptop PC for playing and creating is heard and heated.