Thin, light and nomadic with its 7-hour battery life, the Asus ROG Zephyrus G14 GA401QM-091T is a creator-oriented gaming laptop capable of running recent games thanks to its GeForce RTX 3060 NVIDIA Ampere ray tracing graphics card that accelerates treatments like the AMD Ryzen 9 Cezanne Octo Core processor and the right amount of powerful 16 GB RAM. Equipped with a 14-inch IPS Full HD screen whose frequency of 144Hz improves fluidity in games, this versatile computer designed to play and create enjoys enhanced responsiveness thanks to its fast SSD storage but also a backlit chiclet keyboard as well as a Wi-Fi ax and USB-C connection. 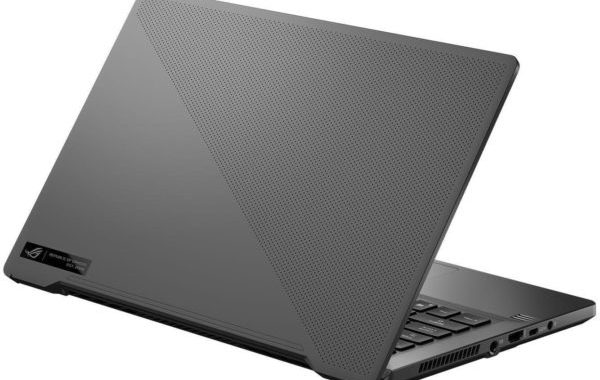 With its gray frame, it has a rather discreet look for a gaming laptop PC, the codes of which it adopts with its angular lines.

Thin and light, this designer-oriented gaming laptop PC is equipped with good connectivity including wireless Bluetooth 5.0 and Wi-Fi ax modules ( more recent and efficient than Wi-Fi ac ) to communicate and connect remotely, a practical HDMI video output for easy connection to a TV for example, 1 audio port, 2 USB 3.2 Type-C (compared to 1 maximum usually) without forgetting 2 USB 3.0 (USB 2.0 compatible) guaranteeing transfers taking place up to 10 times faster than USB 2.0 if you plug USB 3.0 peripherals into it.

We can obviously backlight the keys of the chiclet keyboard which is practical to discern them correctly in the dark.

The screen will be of particular interest to gamers because it enhances fluidity in games thanks to its frequency of 144Hz higher than the 60Hz standard. Creators will also be interested in the screen because it adopts 100% sRGB and IPS characteristics guaranteeing more faithful than average colorimetry as well as important viewing angles, both horizontal and vertical. Thanks to its anti-reflective treatment, the screen also offers better visibility than a shiny panel in a bright environment (eg outdoors). In addition, it lends itself well to the display of High Definition content such as videos due to its Full HD definition and its 16: 9 format.

The Asus ROG Zephyrus G14 GA401QM-091T is aimed at those who want to invest in a compact versatile laptop PC that performs well in terms of gaming and creation and yet is nomadic.

It is indeed easy to carry for a gaming laptop PC with its weight contained at less than 2 kg and its thinness, positioning it at the level of an Ultrabook. In addition to the battery life side, we can expect about 7 hours of battery operation in light use.

However, this versatile laptop PC delivers overall power capable of appealing to demanding users because it is based on 16 GB of RAM associated with an AMD Cezanne APU (Accelerated Processing Unit) Ryzen 9 5900HS Octo Core processor.

In particular, this core provides much faster processing than 8 GB DDR4 and a Quad / Hexa Core processor, the difference being particularly important in areas that are greedy in RAM and CPU resources taking advantage of multi-core, such as video editing, photo editing or 3D rendering. , something to interest creative people.

The GeForce RTX 3060 Max-Q is also capable of supporting recent games, which will appeal to gamers.

On-board NVIDIA Optimus technology activates the GeForce RTX 3060 Max-Q when the performance of the AMD Radeon Vega 8 solution housed within the Octo Core AMD Cezanne Ryzen 9 is insufficient to perform the requested tasks.

More efficient than the UHD 630 of Intel processors, the Vega 8 is preferred as far as possible because it is energy efficient which promotes battery life.
The GeForce RTX 3060 Max-Q is therefore activated to perform graphics work deemed too heavy for the Vega 8, for example to play. With either of these graphics solutions, you can obviously watch photos and videos.

On the storage side, Asus has chosen here a 512 GB SSD, a capacity similar to the standard of hard drives. But compared to the latter, note that an SSD is silent but also less energy, more robust and very swift.

In practice, thanks to the SSD, for example, we get faster on online game cards than with a simple hard drive and we benefit from much faster game / software launches, processing and starts / stops.

Obviously if you need additional space, you can rely on an external storage unit. Favoring a USB-C / USB 3.0 device then represents an interesting option to benefit from fast transfers.

Finally, it should be kept in mind that when this portable PC designed to play and create is strongly pushed (eg games, processing), it is heard and heats up, in particular because of its finesse associated with the greedy on-board components.