Relatively thin and light, the Asus ROG Zephyrus M16 designer- oriented black gaming laptop PC GU603HM-K8018Ttargets gamers and creatives with its 16-inch High Definition WQXGA Pantone screen that faithfully reproduces colors and improves fluidity in games thanks to its 165Hz frequency and 3ms latency. This versatile laptop is powerful thanks to its Octo Core i9 Tiger Lake-H Intel processor and 16 GB of RAM which speeds up multimedia processing. This is also the case with the high-end NVIDIA Ampere GeForce RTX 3060 ray tracing graphics card capable of running recent games. Fast 1TB SSD storage that enhances its responsiveness, backlit keyboard (but without numeric keypad) or connectivity with Thunderbolt 4, Wi-Fi ax and USB-C are also on the program of this laptop designed to play and create. 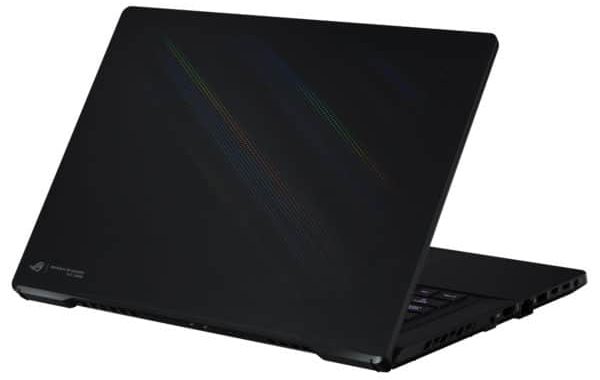 With its angular lines and dark design, this laptop PC for gamers and creatives has an original and relatively discreet gamer allure. It can be recharged by 50% in 30 minutes.

The connectivity integrated into this designer-oriented gaming laptop PC is good, consisting of 2 USB-C including 1 Thunderbolt 4, a practical HDMI video output to easily connect this computer to a TV for example, Bluetooth 5.2 wireless modules and Wi-Fi ax ( more recent and efficient than Wi-Fi ac ) to communicate and connect remotely, Ethernet and audio ports but also 2 USB 3.0 (USB 2.0 compatible) guaranteeing transfers carried out up to 10 times more faster than USB 2.0 if you connect USB 3.0 peripherals.

We can obviously backlight the keys of the chiclet keyboard which allows them to be better discerned in the dark.
On the other hand, the keyboard does not come with a numeric keypad on the right, although this feature is standard from 15 inches. In addition Asus could have integrated its NumPad technology (NumberPad) to facilitate the entry of numbers via a conversion when we need the touchpad in touch pad. 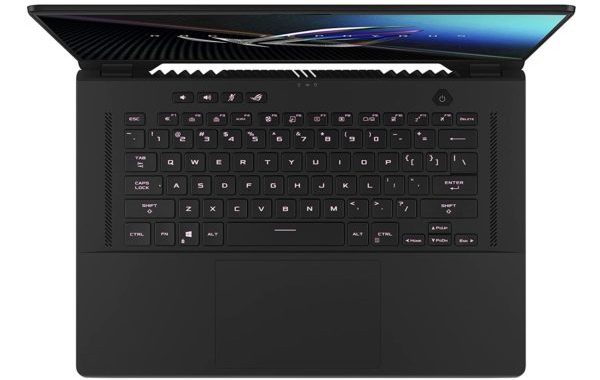 The screen represents an undeniable asset of this portable PC which will interest both gamers and creators. Its latency reduced to 3ms and its frequency of 165Hz have the effect of improving fluidity in games. In addition, as it is anti-reflective, the screen also offers better visibility than a shiny panel in a bright environment (eg outdoors). Its 16 / 10th format, higher than the 16 / 9th, is appreciable when you regularly consult tall documents requiring vertical scrolling.
As a bonus, the screen looks IPS 100% DCI-P3 Pantone. As a result, it displays significant viewing angles, both horizontal and vertical, as well as colors that are much more faithful than average. Lovers of High Definition content are not left out because the screen adopts a WQXGA definition higher than Full HD.

The Asus ROG Zephyrus M16 GU603HM-K8018T may appeal to those looking for a versatile, powerful thin laptop with a gaming and creative focus.

The all-round power provided by this designer-oriented gamer laptop is sure to satisfy demanding users, including gamers and creatives.
Because it is based on 16 GB of RAM associated with an Intel Tiger Lake-H Octo Core i9-11900H processor.
Built around an Intel HM570 chipset, this core notably guarantees much faster processing than 8 GB DDR4 coupled with a Quad / Hexa Core processor.
We particularly feel the difference under heavy work in RAM and CPU resources, such as photo editing, 3D rendering or video editing.

The GeForce RTX 3060 will also be of interest to gamers since it is able to support recent games.

In fact, the GeForce RTX 3060 is activated / deactivated automatically and in real time by NVIDIA Optimus technology, depending on the tasks performed.
To promote battery life as much as possible, Optimus makes maximum use of the Intel Iris Xe, a more modest graphics solution housed within the Octo Core i9.

The GeForce RTX 3060 is in practice called upon by Optimus when it comes to performing graphics work deemed too heavy for the Intel Iris Xe, for example to play. With one or the other of these graphics solutions of course, we can obviously watch photos and videos.

The storage is to match, entrusted to an SSD which has the advantage of being silent while being more energy efficient than a hard drive, more resistant to shocks and much faster. 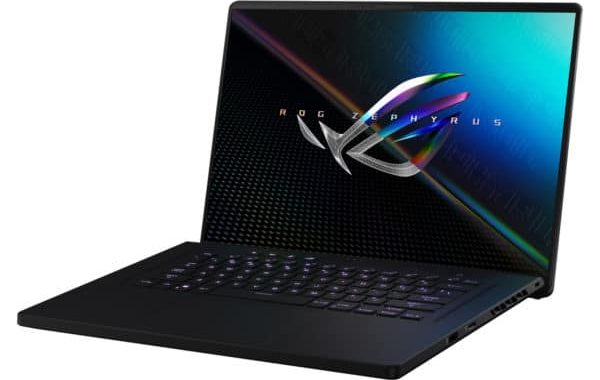 In concrete terms, the SSD guarantees much better responsiveness and fluidity in use than a simple hard drive. Thanks to the SSD, for example, we reach faster on-line game cards and we benefit from much faster game / software launches as well as processing and starts / stops.
As a bonus, the SSD here offers a significant capacity of 1 TB which corresponds to what the vast majority of hard drives offer.

Finally on the battery life side, bet on about 6 hours of battery operation in light use for this versatile laptop designed to play and create whose finesse and weight controlled facilitate transport. But it is noisy under heavy loads (eg games, processing) and heats up under these same conditions but this remains contained for this type of computer.