Thin and light white ultrabook nomadic with its battery life of 14 hours, the Asus TUF Dash F15 TUF516PR-AZ024T is a creator-oriented gamer laptop with a 15-inch IPS Full HD anti-glare screen whose frequency of 240Hz improves fluidity in games. Efficient thanks to its good amount of RAM and its Quad Core i7-11370H Tiger Lake-H processor which accelerates processing just like the high-end NVIDIA Ampere GeForce RTX 3070 dedicated graphics card with ray tracing, it is capable of running games recent. In addition, its responsiveness is enhanced by its comfortable 1TB fast SSD storage and it benefits from a backlit keyboard as well as Wi-Fi ax and USB-C Thunderbolt 4 connectivity. 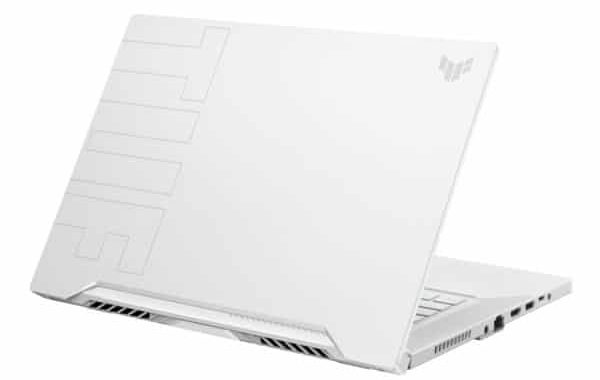 Robust with its chassis to the military resistance standard MIL-STD-810G, it is elegant with its thin and light white Moonlight White design.

Its design allows easy access to storage and RAM.

This creative and gaming laptop PC is well equipped in terms of connectivity with its USB 4 Type-C Thunderbolt 4, its Bluetooth 5.0 and Wi-Fi ax modules ( more recent and efficient than Wi-Fi ac ) to communicate and connect to wireless distance, its practical HDMI video output for easy connection to a TV and / or monitor for example, its Ethernet and audio ports or even its 3 USB 3.0 (USB 2.0 compatible) guaranteeing transfers made up to 10 times faster than USB 2.0 if you connect a USB 3.0 device.

A backlighting system is of course fitted to the chiclet keyboard, which is practical for discerning its keys in the dark.
However, it skips a numeric keypad when it is a standard in 15 inches. To overcome this absence, Asus could have offered its NumPad technology (NumberPad) but this is not the case here. 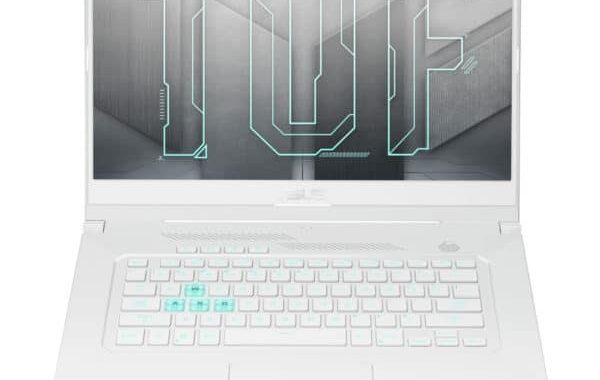 It should be noted that this Ultrabook does not include a webcam. To benefit from it, it will therefore be necessary to opt for an external webcam .

The screen will be of interest to both gamers and creators because it adopts a reduced latency to 3ms as well as a frequency of 240Hz higher than the 60Hz standard, which implies improved fluidity in games. Thanks to its 100% Adobe RGB and IPS characteristics, the screen also displays colors more faithful than the average as well as important vertical and horizontal viewing angles.
As it is anti-reflective, the screen is more readable than a shiny panel in a bright environment (eg outdoors). In addition with its 16: 9 format and Full HD definition, the screen is well suited to videos and more generally to High Definition content.

The Asus TUF Dash F15 TUF516PR-AZ024T can appeal to those who have a good budget and want to invest in a versatile portable PC that is relatively thin and light, portable but also oriented towards creator and player.

Fairly easy to transport thanks to its controlled weight and finesse, this elegant and discreet white laptop will appeal to nomads because in terms of battery life, it can last about 14 hours on battery in light use!

To do this, it relies in particular on SSD storage that is more energy efficient than a hard drive while being more resistant to shocks, silent and much faster.

Concretely thanks to the SSD, responsiveness is much better on a daily basis than with a hard drive. This implies, for example, games / software launches, processing and starts / stops much faster or even a faster arrival on the cards of online games.

In addition here, we are dealing with an SSD with a large capacity of 1 TB which easily rivals hard drives. What if we need even more space? An M.2 slot is free, easily accessible to add a second SSD.

The heart of this laptop delivers solid overall performance to satisfy a maximum of users. It relies on 16 GB of RAM coupled with an Intel Tiger Lake-H Quad Core i7-11370H processor with controlled TDP to limit energy consumption.
These components ensure, for example, faster processing than 8 GB DDR4 and a low-consumption processor in areas that are greedy in RAM and CPU resources using multicore, such as video editing, 3D rendering or photo editing. 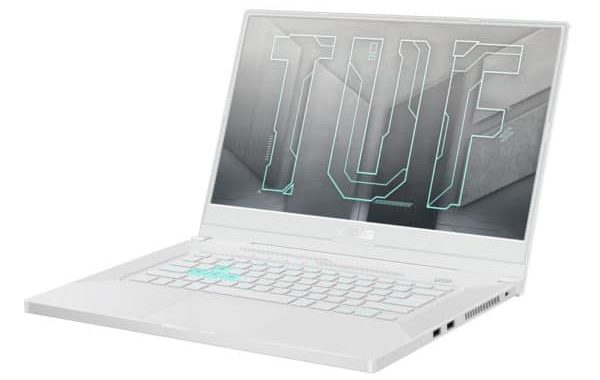 Gamers will also be delighted to be dealing with the GeForce RTX 3070 Ampere as it is capable of running the latest and most demanding 3D games.

In practice, NVIDIA Optimus technology uses the GeForce RTX 3070 automatically and in real time only when the much more modest services of the Intel Iris Xe solution prove to be insufficient to perform the requested tasks. Integrated within the processor, the Intel Iris Xe that they tested (much more powerful than the Intel UHD 630) is indeed privileged to the maximum because its low energy consumption promotes battery life.
Obviously with the GeForce RTX 3070 or the Iris Xe, you can watch photos and videos.

Finally, you have to keep in mind that this Ultrabook gamer is noisy and heats up when it is strongly pushed (ex: treatments, games)