Convertible into a Tablet, the versatile 2-in-1 Asus VivoBook Flip 14 TM420IA-EC071T laptop with 14-inch IPS Full HD touchscreen, 360 ° openable, benefits from fast SSD storage for enhanced responsiveness. Equipped with a backlit keyboard, a NumPad numeric keypad module as well as a Wi-Fi ax and USB 3.1 Type-C connection, this sober thin and light PC is based on a Hexa Core Ryzen 5 AMD Renoir processor and a good amount of RAM for good performance in current use and the ability to run low-power games. 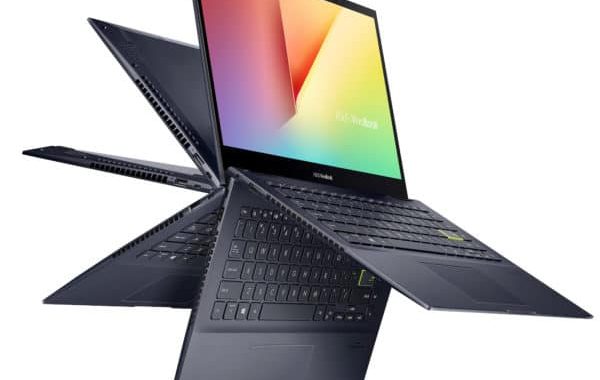 It is a sober and nonetheless original design that this computer sports through its Bespoke Black metal frame with enter key cut out in yellow, openable 360 ​​° with its special hinge (which supports 20,000 opening / closing cycles), this which allows it to be transformed into a Tablet.

The multi-touch touch technology indeed equips the screen, enough to interact with the software and the system by simple gestures / pressures of at least one finger applied to the screen.
Because of its tactile aspect, the screen is brilliant: it therefore revives the colors but proves to be subject to reflections in a bright environment (eg outdoors).

With its precise Full HD definition and 16: 9 aspect ratio, the screen is well suited to displaying High Definition content such as videos. It also has significant vertical and horizontal viewing angles thanks to its IPS technology.

The chiclet keyboard benefits from a practical backlighting system for the keys to distinguish them in the event of limited ambient light, an appreciable feature.

A NumPad module (NumberPad) is also present and allows the touchpad to be used as a touch numeric keypad if necessary. An interesting feature while as with all laptops smaller than 15 inches, there is not enough room to the right of the keyboard to accommodate a physical numeric keypad. 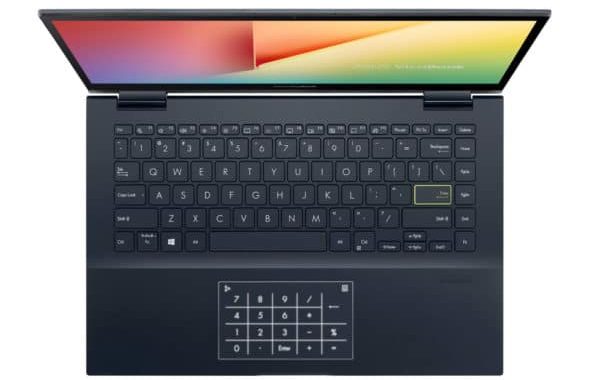 This 2-in-1 laptop is well-equipped in terms of connectivity with its USB 3.1 Type-C, its Wi-Fi ax modules ( newer and more efficient than Wi-Fi ac ) and Bluetooth 5.0 to communicate and connect to wireless distance, its useful HDMI video output to easily connect it to a TV or monitor for example, its audio port or even its 2 USBs compatible with USB 2.0 and USB 3.0, USB 3.0 guaranteeing transfers up to 10 times faster than USB 2.0 if you plug in a USB 3.0 device.

The Asus VivoBook Flip 14 TM420IA-EC071T is a compact laptop convertible into a Tablet designed for everyday mobile use.

It has SSD storage that rivals hard drives in terms of capacity with its 512 GB while being quiet, more robust, less power consuming and much faster.

Concretely thanks to the SSD, one obtains much faster starts / stops, treatments and launches of software for example, and one arrives more quickly on the cards of the online games. More generally, the SSD guarantees better fluidity and responsiveness than a hard drive.

Of course if you need more space, you have the option of using an external storage unit. Opting for a USB 3.0 / USB-C device then represents an interesting solution to obtain fast transfers.

The SSD goes well with the heart of this computer which delivers general performance capable of satisfying a number of users. It is indeed built around a good amount of 8 GB RAM and an AMD Hexa Core APU (Accelerated Processing Unit) Ryzen 5 4500U low consumption Renoir processor. 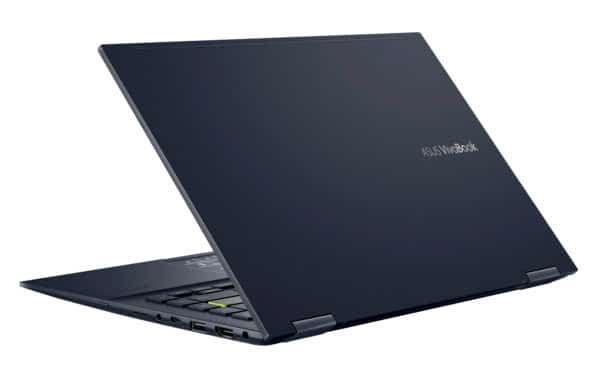 The latter houses the Radeon Vega 6, which has the advantage of being significantly more efficient than the UHD 620 integrated in Intel processors and of being positioned at the level of an entry-level graphics card. Result despite the absence of a dedicated graphics card, this thin and light PC allows you to play undemanding titles but also to watch photos and videos.

As for autonomy, bet on about 6 hours of battery operation in light use while waiting for more concrete tests of this PC whose lightness, compactness and fineness facilitate transport.