You said immersive? The Asus ZenBook UX392FA-AB002R reveals a gorgeous 13.9-inch display that takes up no less than 97% of the space allocated by the case, a record at this level. Sophisticated in its Utopia Blue design, it concentrates an interesting productive office base with its quad core Core i7, generous RAM and good capacity SSD storage allowing professionals to manipulate video or store in good conditions. The amenities are there with its backlit keyboard and fingerprint reader but the connection loses the Thunderbolt 3 Zenbook S13 previous … 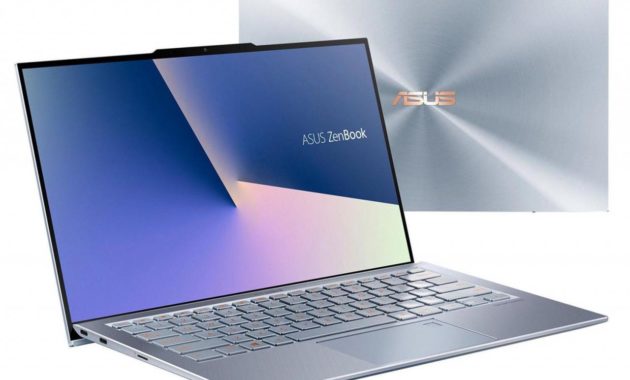 Specs of the Asus ZenBook UX392FA-AB002R

This is a new color “Utopia Blue” that presents Asus on its series Zenbook 14 UX392, also found on the Zenbook UX431. This shade is reminiscent of the silver a bit purple Zenbook UX410. Here, the color silver takes bluish highlights and the aesthetic is worked with the concentric effect dear to Zenbooks on the back of the lid and a brushed transverse finish around the keyboard. The unibody aluminum chassis meets the MIL-STD-810G military resistance standard for rugged durability (extreme heat, shock, drop, humidity, altitude, sun exposure). This gives a bit of balance to his thinned figure. And that is saying little! The Zenbook S is thin and light, tipping the scales around 1 kilo, but also very compact with a 316 x 195 mm format thanks to millimeter-sized screen borders.

The screen is undoubtedly the greatest strength of this Asus ZenBook UX392FA-AB002R. It grows compared to the previous Zenbook S13 and goes from 13.3 “to 13.9” without impact on the size of the case. We thus discover the finest screen borders ever crossed until there while preserving the original place of the webcam at the top thanks to an ingenious notch which also allows to open the PC easily. The Full HD screen (1920 x 1080 px) is top quality, bright and rich in color. It is based on an IPS panel and covered with a layer of glass that reinforces the frame but produces significant reflections to the image, to take into account if you work in a bright environment or on the move (in the train for example).

Less exciting, the connection has become poorer compared to the Zenbook UX391. It hosts a microSD player and a standard size Type-A USB but says goodbye to Thunderbolt 3. There is also no built-in HDMI port. Users will need to look to the two USB Type-C gen2 ports for video output and charging. The wireless modules are latest generation Wifi ac and Bluetooth 5.0. 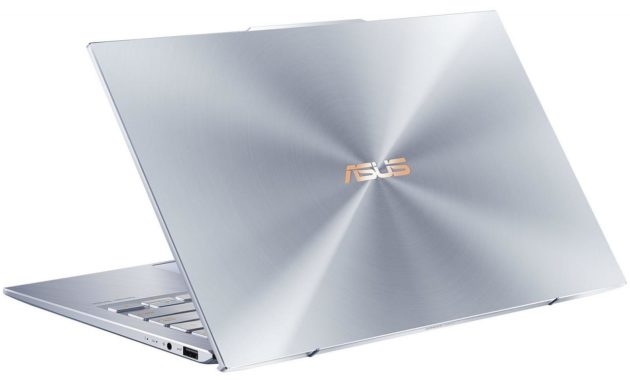 The heart of the ultrabook does not fail to plumb with a generous total memory of 16 GB which will allow a perfect ease in multitasking and see the coming years serenely. Added to this is a Quad Core i7-8565U processor that promises great capabilities. This latest-generation quad-core processor gains a significantly higher Turbo Boost frequency than the previous generation (Kaby Lake Refresh), allowing Intel to announce a gain of around 10%. Concretely, the current use is fully supported (Web browsing, Office processing, video) and more greedy applications drawing on multicore architecture (video editing, Photoshop pushed, Lightroom …

Storage also has great potential as it is entrusted to a 512 GB NVMe PCIe SSD. This will significantly increase the overall system responsiveness on a daily basis compared to a mechanical hard drive configuration. Based on a PCIe interface faster than SATA3, the SSD provides shortened download times, a virtually instantaneous launch of Windows and very fast file copies, not to mention the qualities in terms of energy savings, durability and of silence of the SSD. To spoil anything, its capacity is not ridiculous and can host a good part of your toy library.

Players and creative professionals will not find anything to be entertained or created in this ultrabook in the absence of a dedicated graphics card, but the Zenbook UX392FA-AB002R can still rely on the Intel UHD 620 chip integrated into the processor to ensure a minimum Estimated at the level of a GeForce MX110, it will allow some casual players to launch some low-demanding titles in Full HD with great fluidity.

Let\’s end with the autonomy lent to this UX392FA-AB002R. A battery of 50 Whr is at work, as in all other ZenBooks 13 and 14 inches crossed over the past year. Asus has however optimized its operation and manages to get a respectable autonomy of about 9 hours in Web browsing with active WiFi. A full charge takes about 1 hour and 30 minutes, but you can charge 60% of the battery in about 50 minutes.