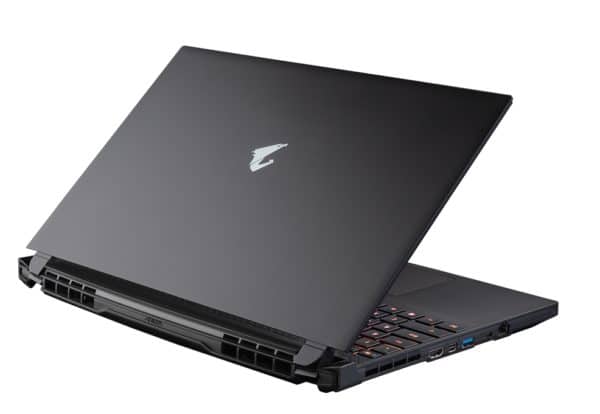 Lightweight and relatively thin for a powerful gaming laptop, the Gigabyte Aorus 15G YC-8FR2450SH takes advantage of a high-end graphics card GeForce RTX 3080 NVIDIA Ampere with ray tracing capable of running recent games and speeding up processing. image of the large amount of RAM and an Octo Core i7 Comet Lake-H processor. This computer intended for gaming and creation is adorned with a frequency of 240Hz at its 15-inch Full HD IPS screen to improve fluidity in games. It also benefits from an SSD with a large capacity of 1 TB which enhances its responsiveness but also a backlit chiclet and connectivity with Wi-Fi ax, USB-C and dual video output, all under Windows. 10 Pro. 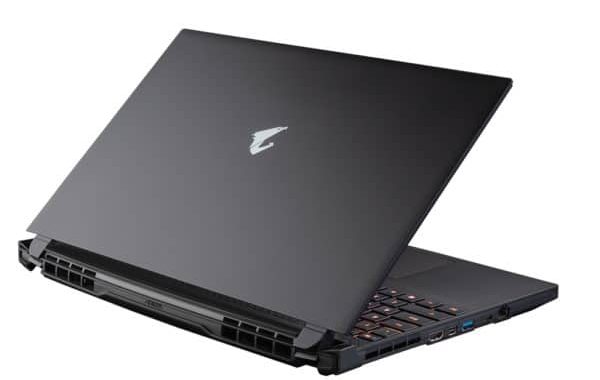 It sports an original gamer design with its angular lines and its silver and black colors.
In addition, its webcam takes place not above the screen may below, and you can slide over a cover for better privacy.

Here the installed system is Windows 10 Pro, a more complete edition than classic Windows 10 with its advanced network management and security tools such as BitLocker.

This designer-oriented gaming laptop also has good connectivity, except that it does not offer Thunderbolt. We find here Bluetooth 5.0 and Wi-Fi ax modules ( more recent and efficient than Wi-Fi ac ) to communicate and connect wirelessly, HDMI video outputs and practical mini-DisplayPort to easily connect this PC to a monitor or TV for example, Ethernet and audio ports, 1 USB-C but also 3 USB 3.0 (USB 2.0 compatible) guaranteeing transfers up to 10 times faster than USB 2.0 if USB 3.0 devices are plugged into it.

A backlighting system is of course fitted to the chiclet keyboard, which is useful for distinguishing them in a dimly lit environment. 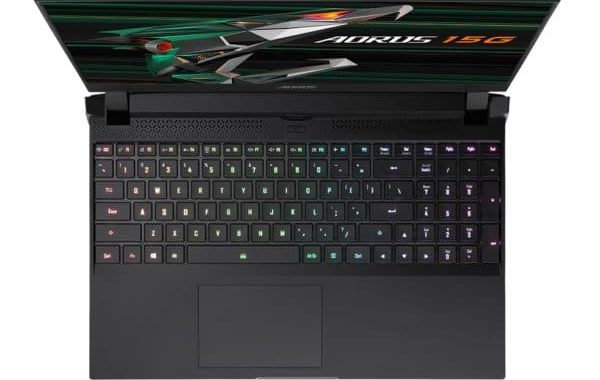 The screen particularly targets gamers because it improves fluidity in games thanks to its 240Hz refresh rate higher than the 60Hz standard. It also displays colors more faithful than the average as well as important viewing angles, both horizontal and vertical, thanks to its IPS technology. The screen is also well suited to High Definition content such as videos because of its Full HD definition and its 16: 9 format. Anti-reflective coating, the screen also offers better visibility in a bright environment (eg outdoors) than a shiny panel.

The Gigabyte Aorus 15G YC-8FR2450SH can appeal to those who want to acquire a versatile 15-inch laptop powerful in games and creation oriented.

It integrates neither more nor less than one of the most powerful mobile graphics cards of the moment, the high-end GeForce RTX 3080 with ray tracing with NVIDIA Ampere architecture.

Just like the Intel UHD 630 solution integrated into the processor, the GeForce RTX 3080 of course allows you to view photos.

It is the on-board NVIDIA Optimus technology that automatically switches between the two in real time, depending on the tasks performed. Optimus gives maximum preference to the Intel UHD 630 despite its modest features because it favors battery life compared to the GeForce RTX 3080 thanks to its low power consumption.

The GeForce RTX 3080 also has the advantage of speeding up processing under software using GPU computing power, such as Sony Vegas or Adobe Premiere / Photoshop, which will be of interest to creatives.

The latter as well as the gamers will appreciate that the heart of this computer is up to the task. It is indeed built around an Intel HM470 chipset, a Comet Lake-H Octo Core i7-10870H processor but also a large amount of 32 GB RAM.
These components notably guarantee much faster processing than \’a Quad Core processor with 8/16 GB DDR4. You can really feel the difference in work requiring CPU and RAM resources using multicore, such as video editing, photo editing or 3D rendering.

The storage is to match, entrusted to an SSD with a large capacity of 1 TB rivaling hard drives. But as a bonus, remember that an SSD is silent while being more energy efficient than a hard drive, more resistant to shocks and much faster. 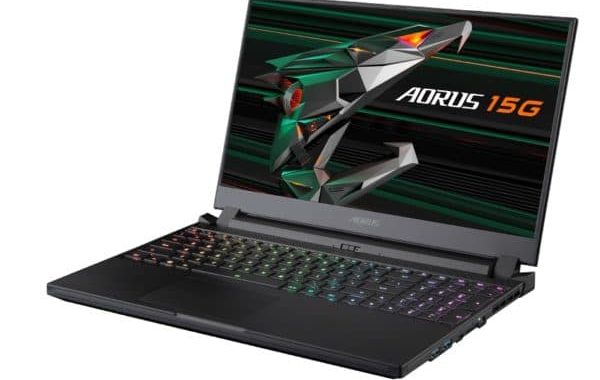 Thanks to the SSD, for example, we take advantage of much faster game / software launches, processing and starts / stops, or even a faster arrival on the cards of online games.

Good point for scalability, an M.2 slot is free to add a second SSD if necessary.

Finally, if its contained weight as well as its thinness make it easier to transport, this implies noise and heating when this portable gaming PC is in high demand (eg games, processing). As for battery life, expect about 5 hours of battery operation in light use.