2-in-1 ultrabook with an elegant silver design, the thin and light HP Envy x360 15-ed1000nf is convertible into a Tablet with its 15-inch IPS Full HD touchscreen that can be opened in 360 °. Efficient in everyday use thanks to its good amount of RAM and its Intel Quad Core i5 Tiger Lake processor with Iris Xe graphics, it is capable of running games that are not too greedy. Versatile, its responsiveness is enhanced by its fast SSD storage coupled to an Intel Optane module. It also benefits from a backlit keyboard, a biometric reader, a webcam shutter but also a Wi-Fi ax and USB 3.1 Type-C connection. 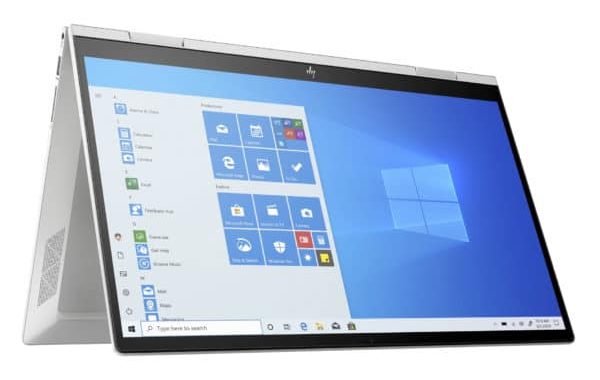 With its natural silver aluminum frame with anodized and sandblasted finish that can be opened at 360 ° to transform into a Tablet, it has an elegant, discreet and nonetheless original look.

The screen is adorned with multi-touch touch technology. Therefore, by simple application of at least one top and pressures / gestures, one can interact with the system and the software.
Due to its tactile aspect, the screen is brilliant. It therefore revives colors but is sensitive to reflections in a bright environment (eg outside).

Thanks to its IPS technology, the screen has large viewing angles, both horizontal and vertical. Its colorimetry is however average, below that offered by high-end IPS panels. Due to its Full HD definition and its 16: 9 format, the screen lends itself in any case very well to the display of High Definition content such as videos.

Above, the webcam can be closed which will be appreciated by those who wish to preserve their privacy.

A biometric reader is also integrated to authenticate on the PC by fingerprint recognition, and this via the Windows Hello functionality.

The chiclet keyboard can be backlit which is very practical for distinguishing its keys in a dimly lit environment.

This hybrid 2-in-1 Ultrabook is well-equipped in terms of connectivity with its wireless Bluetooth 5.0 and Wi-Fi ax modules ( more recent and efficient than Wi-Fi ac ), its practical HDMI video output to connect it easily to a monitor or a TV for example, its audio port, its USB 3.1 Type-C but also its 2 USB 3.0 (USB 2.0 compatible) guaranteeing transfers taking place up to 10 times faster than USB 2.0 if USB 3.0 peripherals are connected to it.

The HP Envy x360 15-ed1000nf is a thin and light 15-inch High Definition laptop convertible into a Tablet intended for general-purpose mobile use.

It stands out for its good amount of RAM of 12 GB above the average very appreciable in multitasking which supports the processor well, an Intel low consumption Tiger Lake Quad Core i5-1135G7.

We thus benefit from good general performance capable of satisfying many users, with the exception of those who often carry out heavy work in processor resources. Those may prefer to turn to a PC with a non-low consumption processor.

The Tiger Lake Quad Core i5-1135G7 has the advantage of integrating within it the Intel Iris Xe graphics solution tested by us, which is significantly more efficient than the classic Intel UHD 620. In fact, thanks to the Iris Xe , you can watch photos and videos but also play titles that do not require too much graphic resources.

Responsiveness is further enhanced in this versatile thin and light 2-in-1 Ultrabook, thanks to the onboard SSD storage.
An SSD is indeed silent while being more energy efficient, more robust and much faster.

Thanks to the SSD, this hybrid laptop convertible into a Tablet is significantly more responsive and fluid than if it were equipped with a simple hard drive.
We thus benefit from much faster starts / stops just like the launching of software / games and treatments, and we reach the maps of online games faster. 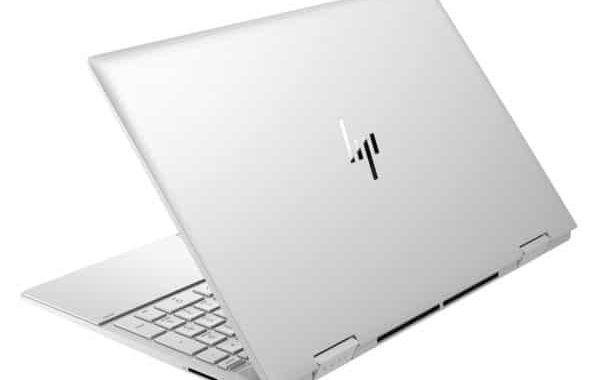 It is a 512 GB SSD that we find here integrated, a capacity in phase with the standard of hard drives.
But if you need more space, you can obviously rely on an external storage unit such as a USB 3.0 (or USB-C) device to benefit from fast transfers.

Finally in terms of autonomy, while waiting for more complete tests, bet on about 6 hours on battery in light use for this 2-in-1 Ultrabook whose transport is facilitated by the thinness and the weight less than 2 kg.