The HP Pavilion 15-eg0003nf is a perfect ultrabook for productive office automation. This elegant 15-inch in its silver body is thought to work and play efficiently since it is based on an 11th generation Core i5 Quad Core processor supported by 16 GB of RAM and fast storage (512 GB SSD). The matte Full HD IPS screen provides its share of comfort to moviegoers, the keyboard is backlit and has a numeric keypad, the look is neat and the battery life is decent but we have already seen 15 inches more compact and lighter. 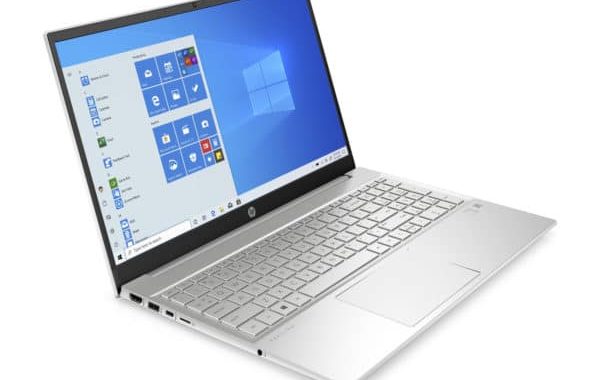 The HP Pavilion 15-eg0067nf takes the majority of the aesthetic codes of its predecessor (15-cw) with its more angular silhouette or its central hinge which raises the keyboard when the cover is opened even if the graphic design of the speaker grilles disappears. The ultrabook opts for a consensual silver color, a design that will appeal to everyone and blend in with any environment, but which does not lack elegance with chrome finish details here and there.

We also observe that the borders around the screen have been slightly refined, which implies a smaller footprint. Indeed, the size of the PC has gone from 361 x 245.6 mm on the 15-cw against 360 x 234 mm here. The thickness remains the same with 17.9 mm and the weight a few grams ( 1.75 kg ) for this model without hard disk but these measurements remain in the average of the category of 15-inch ultrabook.

Regarding the screen, the “micro-edges” are convincing and highlight the extended Full HD definition (1920 x 1080 px) which allows you to best reveal your content in High Definition and the shiny panel of the old models is replaced by an anti-reflective panel. You thus benefit from increased visual comfort in strong ambient light. In addition, we are dealing with an IPS panel with wider viewing angles than entry-level TN. Expect a mid-range panel with a brightness around 250 nits max and a not very extensive colorimetry.

Good point, the keyboard is backlit in white to highlight the keys and allow better typing in a dark environment. By day, it should be deactivated on the other hand, otherwise it is difficult to distinguish the white lettering on the silver keys.

The connection is of a correct level. It receives three USB ports including two USB 3.2 and a USB Type-C (Gen2), an HDMI output and an SD card reader (announced SD by HP but obviously microSD in view of the visuals). The Gigabit Ethernet port is bowed out, however, while the wireless modules opt for Bluetooth 5.0 and recent WiFi 6 AX. We have no certainty as to the presence or not of the fingerprint reader on this model. 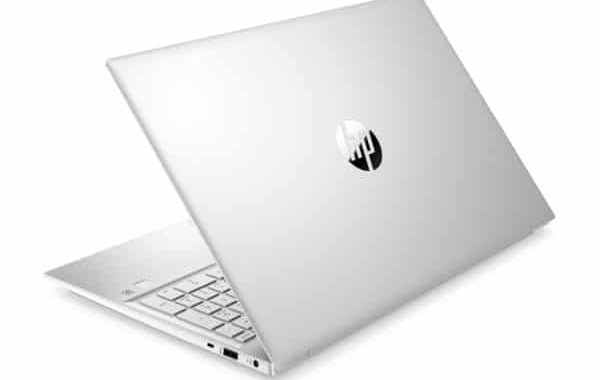 To animate this HP Pavilion 15-eg0067nf, we find an 11th generation Core i5-1135G7 processor (Tiger Lake), this processor with a higher TDP (28W) than its predecessors (15W) gains a fairly visible performance increase on advanced software (Lightroom, Capture One Pro, Davinci Resolve, 7Zip, etc.), a little less on basic everyday tasks (Office, surfing the Web, streaming …). We understand, these tasks in question are perfectly taken care of by the ultrabook, but since these are missions that only commit very few resources, the difference between the generations is not noticeable. And then keep in mind that we still have a low-power Core i5 in front of you,

Opposite, the RAM provides 16 GB of RAM , a generous total that ensures impeccable fluidity in multitasking.

But the most interesting gain of this Gen11 Tiger Lake lies above all in their new integrated graphics chip, the Iris Xe. Thanks to it, Intel is back in the race against AMD but also and above all against small NVIDIA graphics cards such as the GeForce MX250 or the GeForce MX350. The performances of the Iris Plus G7 of the Gen10 (Ice Lake) are exceeded by a good length. So, with the Iris Xe, you should be able to play many games at 1080p under good conditions and work on fairly graphics-intensive tasks (Lightroom) without delay. Another benefit of having a faster graphics chip integrated into the processor is that it simplifies the design of the ventilation system and therefore causes less noise and heat than in a configuration with a dedicated graphics card.

For its part, the storage is entrusted to a 512 GB M.2 NVMe PCIe SSD which will bring a welcome dose of responsiveness to the system. Compared to a standard mechanical hard drive, is is quieter, more robust and energy efficient, and allows Windows to achieve remarkable fluidity with short load times and zero latency execution. What’s more, its capacity is nothing short of ridiculous and can accommodate a good chunk of your game library although some may not find it sufficient.

Finally, the 41 Whr battery should allow about 6 hours of battery life in Internet browsing with active Wifi, enough to enjoy a little freedom on the move, without asking too much. 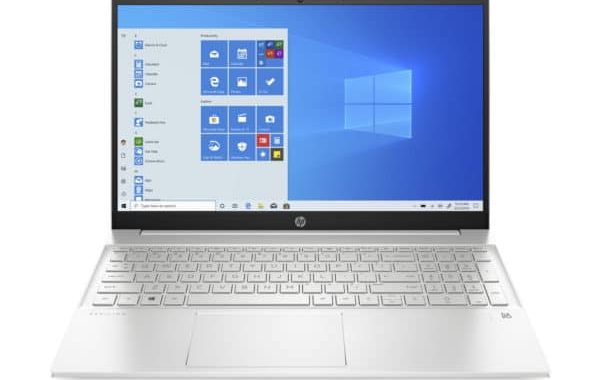