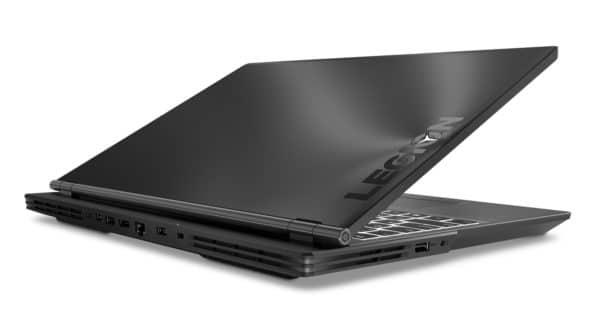 Oriented gamers, the Lenovo Legion Y540-15IRH (81SX00VAFR) is a black 15-inch IPS Full HD anti-glare gaming laptop PC capable of running recent games with its NVIDIA Turing GeForce RTX 2060 ray tracing card which also speeds up processing. Its responsiveness is enhanced by its fast SSD storage and it delivers solid performance thanks to its good amount of 16 GB RAM and its Quad Core i5 Coffee Lake Refresh processor. Backlit chiclet keyboard and connectivity with 2 video and USB-C outputs are also on the program for this PC.

It has a gamer look, taking up the codes of the genre while showing originality with its black Raven Black frame with angular lines and webcam positioned under the screen and not above.

Its cooling is provided by 2 fans and heat pipes which evacuate the heat from the rear, the sides and the underside (rear elevation).

This gaming laptop PC has a good connection including 1 USB 3.1 Type-C, Wi-Fi ac and Bluetooth 4.2 modules for remote connections and communications, 2 video outputs (HDMI and mini-DisplayPort) useful for connecting it easily to a TV or monitor, for example, Ethernet and audio ports as well as 3 USB 3.0 (USB 2.0 compatible) guaranteeing transfers up to 10 times faster than USB 2.0 if you connect USB peripherals 3.0.

A backlighting system is also fitted to the chiclet keyboard, which is practical for distinguishing its keys in a dimly lit environment.

Thanks to its IPS technology, the screen has large vertical and horizontal viewing angles. However, its colorimetry is average, lower than that of more high-end IPS panels. As it adopts a 16: 9 format and a precise Full HD definition, the screen lends itself well to the display of videos and more generally of High Definition content. Anti-reflective coating, the screen also offers better visibility than a shiny panel in a bright environment (eg outdoors).

The Lenovo Legion Y540-15IRH (81SX00VAFR) targets those looking for a versatile 15-inch laptop that performs well, including in gaming.

Recent games can be supported by this laptop targeting gamers as it features the dedicated NVIDIA Turing GeForce RTX 2060 high-end graphics card with ray tracing.

Creatives will also appreciate that the GeForce RTX 2060 speeds up processing in software using GPU computing power, for example in Adobe Photoshop / Premiere or Sony Vegas.

Viewing photos and videos is of course also possible with the GeForce RTX 2060.
But as Optimus technology is not available due to the lack of a graphics solution integrated into the processor, the battery life of this gaming laptop PC is low.
In this area, bet on approximately 2h30 of battery operation in light use.

Built around an Intel HM370 chipset, this core supports the GeForce RTX 2060 well in games and in fact delivers solid overall performance capable of satisfying as many users as possible.
Creators will also appreciate that these components provide faster processing than 8 GB DDR4 and Quad Core i5-9300HF, the difference being particularly noticeable in work requiring RAM and CPU resources, for example in photo editing, video editing or 3D rendering. .

The storage is to match, entrusted to an SSD guaranteeing a faster arrival on the cards of online games than a simple hard drive for example or even games / software launches, processing and starts / stops much faster.

The SSD actually provides much better responsiveness and fluidity on a daily basis than a hard drive, because it is much faster than the latter. As a bonus, the SSD is also more shock resistant, more energy efficient and quiet.

Here the SSD offers a capacity of 512 GB in phase with the standard of hard disks.
If more is needed, a 2.5 inch slot is available to add a second SSD or hard drive.
We also have the possibility of using an external storage unit such as a USB-C / USB 3.0 device to benefit from fast transfers.

Finally, keep in mind that in the event of heavy loads (eg games, processing), this gaming laptop heats up and is heard, even in everyday use due to the absence of Optimus.