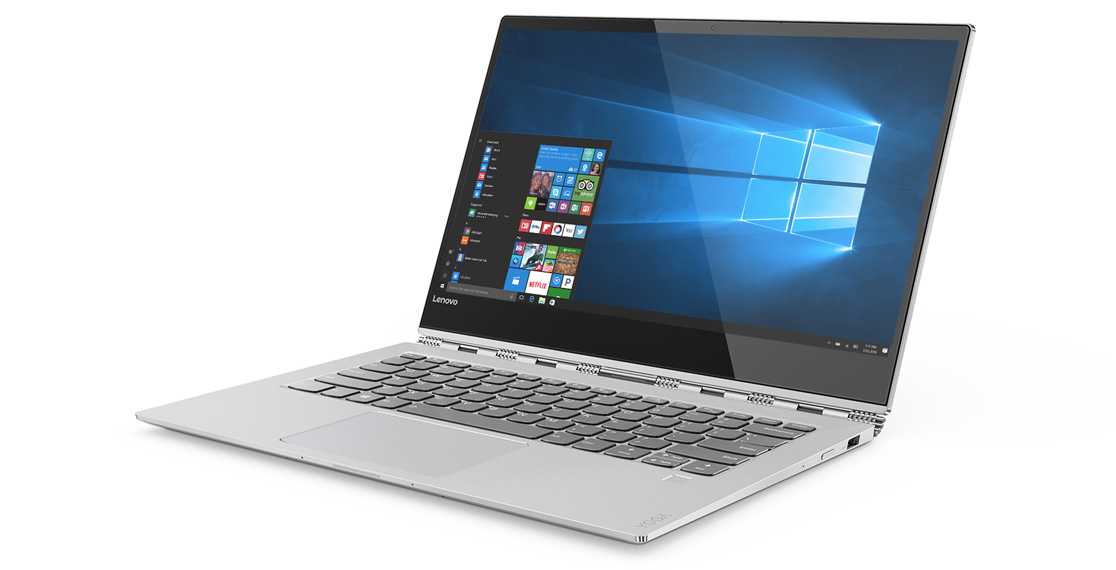 At the origin of the 2-in-1 convertible notebook concept, Lenovo has used its experience to refine its Yoga over the years. The Lenovo Yoga 920 is now the flagship of the range and, let’s say it from the outset, has many assets to seduce the nomads.

Our test model is actually a limited series designed by Louis Aymonod, a student at Istituto Europeo di Design. Particularity of the Yoga Vibes, the presence of a glass lid decorated with motifs expressing according to Lenovo ” the dynamism of the Yoga brand by its simplicity and refinement“. The result is successful, Yoga Vibes and stands out from competitors while maintaining a certain sobriety, able to attract the greatest number. The only grievance could be increased fragility due to the presence of glass but with regard to Gorilla Glass, there should be no concern for any user carrying with a minimum of care his ultrabook. Another good surprise, despite a dark color, the lid is not (too) sensitive to fingerprints.

The rest of the chassis is more conventional with its gray color. Made in aluminum, the design suffers no complaints. The adjustments are perfect, no bending zone is deplorable. The Yoga 920 is a high-end laptop and it feels like the first grip. A feeling reinforced by the system of hinges, a real piece of engineering. In addition to an undeniable aesthetic side, this mechanism is very practical to switch in the blink of an eye tablet or easel mode while ensuring excellent support.

Finally, if Yoga does not take advantage of the finest screen edges of the market (7 mm at the top, 4 mm at the sides), it has the merit of keeping a webcam in the upper amount of the slab and thus maintain a “conventional” angle of view unlike other competitor ultrabooks. Too bad, however, that the webcam is not compatible with Windows Hello (facial recognition). It will therefore use a traditional password to unlock the session or use the fingerprint reader (visible between the bottom of the keyboard and the Intel sticker).

Ultrabook often rhymes with minimalist connectivity. Lenovo Yoga is no exception. On the right, the presence of a USB 3.1 (gen 1) port remains reassuring and practical on a daily basis. On the left, a jack and two ports USB 3.1 (gen 2) compatible Thunderbolt 3. One of them is used for the mains supply. The other can be used to connect an external screen (via an HDMI adapter if necessary) but also various devices (USB key, external hard drive, …).

Each user has his preferences drawn from his own past experiences, difficult to generalize when it comes to assessing the comfort and efficiency of a laptop keyboard. However, that of Yoga should pose little difficulty. Certainly, with a race less than a millimeter the shot may seem a little dry and ask a (short) period of adaptation to some but in practice, it is easy to find a fast pace while enjoying a nice enough shot.

In contrast, the backlight of the keyboard offers only two levels of intensity. The first is rather suitable in a low light environment but (a little) too intense in a room without lighting. The second is for its part rather intended to be used during the day. Even if this is not really inconvenient in practice, one would appreciate a better granularity in the adjustment of light intensity. 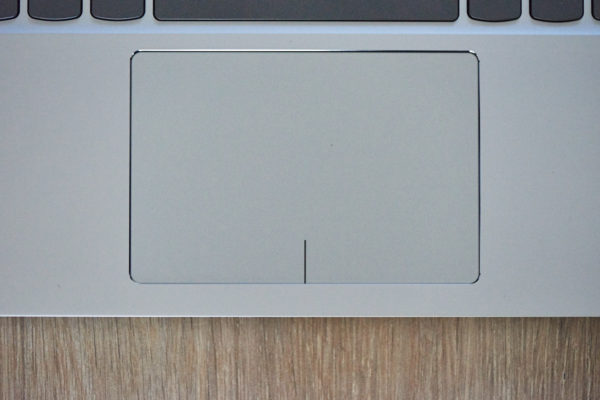 On the side of the touchpad, again, we have little criticism. Once adjusted according to the preferences of the user, it is accurate and responsive both in movement and multitouch gestures thanks to its smooth and spacious surface (105×71 mm). 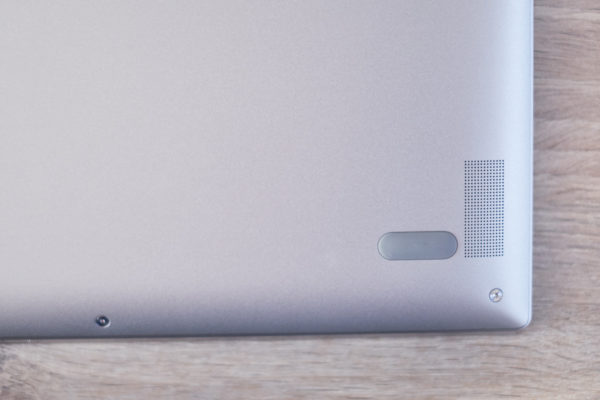 Lenovo puts forward a “Dolby” sound. In practice, no significant difference compared to other ultrabooks on the market. The rendering is unconvincing and lacks depth. Music lovers will have no choice but to use an external audio system.

Lenovo offers two slabs on its Yoga, one Full HD, the other UHD (4K) which is equipped with the model tested. With 3840×2160 pixels, the display is perfectly defined regardless of the display settings chosen. In practice, because of its 13.9 inches, the most suitable setting is probably the equivalent of a workspace of 1536×864 (250% zoom) or even Full HD (200%) for those who do not have no problem with pretty small texts.

As for colorimetry, Yoga is doing very well. The sRGB space is fully covered (82% of the RGB), the contrast ratio is 870: 1 with a native white dot at 6100K, a maximum brightness at 373 cd / m2 and an average DeltaE less than 1 after characterization.

Who says convertible laptop, says touchscreen. The Yoga 920 is delivered with a Lenovo Active Pen 2 stylus offering 4,096 levels of pressure opening up new possibilities for creative people. Be careful however, as we will discuss in the performance part, the UHD slab is sometimes a source of slight latencies, for example when drawing a melting mask. The grip of the stylus could be improved, the latter having a tendency to slip. Some people will also blame him for the lack of a storage system. A support that is housed in the USB-A port is provided but it is inconvenient to use. 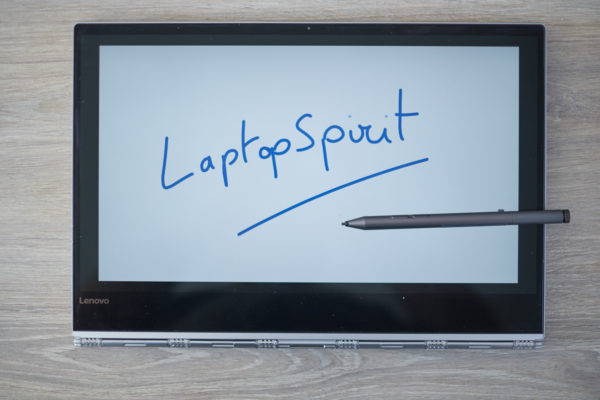 A little parenthesis about using Windows in tablet mode. While advances have been made in recent months with updates such as Fall Creators, there is still room for a user experience that lives up to expectations. Long-awaited improvements on the operating system side but also and above all, software vendors, most of which are still unable to offer interfaces that are really adapted to tactile use …

Equipped with an Intel Core i5-8250U processor, a quad core low-power model of the latest generation, the performance is typical of an ultrabook marketed in 2018. In practice, the power delivered is suitable for most users, sufficient to browse the Internet, watch videos and even occasionally perform more demanding tasks, for example a small video editing or some adjustments in Photoshop. However, because of its UHD panel and the lack of a dedicated graphics card, some programs like Lightroom lack fluidity. Prefer a Full HD panel in this case.

By ordering on the Lenovo online store , it is also possible to increase the memory to 16 GB, to opt for a Core i7-8550U or to enjoy a 1 TB SSD.

Most of the time, Lenovo Yoga is very discreet. In normal use, the fan is inaudible. Sometimes it happens that it triggers at a first threshold (about 34 dBA) where only a slight breath can be perceived in a quiet environment. If the system is more stressed for several minutes, the fan is then more present (about 39 dBA) but without being disturbing. No worries about the temperature: even if the processor sometimes reaches 80 ° C, the chassis is slightly warm to the touch (and only near the hinge).

Autonomy remains THE first choice criterion for the purchase of an ultrabook. The presence of a UHD slab may give rise to fears about autonomy but rest assured, it is not so. The Yoga 920 is able to easily hold near 9am away from a power outlet in mixed use. Autonomy that can even go up to more than 14 hours by reducing the brightness and with active airplane mode. Finally, in intensive use with the processor used at 100%, it is doing just as well by being able to hold 2:44 before extinguishing.

Note the possibility of limiting the load to 60% of its capacity to extend the life of the battery if the computer is used mainly on mains. In this regard, the power supply measures 108x46x29 mm for a weight of 175g. Being in USB-C format, it is easy to use another charger or an external battery.

Lenovo Yoga 920 – Our review in summary

After a few days in his company, the record is without appeal. The Yoga 920 is an excellent ultrabook. Well finished, with excellent autonomy, light and pleasant to use in everyday life. In addition to its most successful aesthetics, the hinge ensures excellent support in all circumstances. Even if everything is not perfect, the tablet mode is a plus which it will be a shame to deprive yourself. The 4K slab brings undeniable comfort but will not necessarily be the most judicious choice for all users. There remains the thorny question of the tariff. The configuration of our model is displayed at 1450 €. A fairly high price, the competition generally offering 16 GB of RAM and / or a SSD of 512 GB in this price range.