Powerful laptop in terms of gaming and creation, the MSI GE66 10SGS-208FR Raider with 15 inch IPS Full HD screen make the high frequency of 300Hz reinforces the fluidity in games is capable of running recent and greedy titles with its graphics card high-end GeForce RTX 2080 ray tracing which enhances multimedia processing. It also provides powerful processing thanks to its Octo Core i9 Comet Lake-H processor and its good amount of RAM while its fast SSD storage boosts its responsiveness. Backlit chiclet keyboard (however without numeric keypad) and Wi-Fi ax and USB 3.1 Type-C connectivity are also on the program for this PC which skips over the Tunderbolt.

The MSI GE66 10SGS-208FR Raider is currently marketed by Cybertek and GrosBill . It offers an attractive configuration / price ratio for its category where it is one of the most powerful in graphics and one of the only ones to benefit from such an efficient processor (Octo Core), an amount of RAM as large as well as a screen with such a high frequency.

For a gaming laptop whose codes he takes up with its black chassis with angular lines and touches of color, it sports a relatively elegant design.

Cooler Boost 5 technology takes care of cooling it using 2 fans associated with heat pipes and ventilation grilles. Matrix Display technology is also present to display content on 4 screens (max), including the PC screen and up to 3 external screens.

In terms of connectivity, this designer oriented gaming computer is well equipped if we make an exception of the Thunderbolt 3 that we would be entitled to expect for such a PC.
There are 2 USB 3.2 Type-C, HDMI video outputs and mini-DisplayPort useful in order to easily connect this PC to a TV and / or a monitor for example, Bluetooth 5.0 and Wi-Fi ax modules ( newer and more efficient than Wi-Fi ac ) to communicate and connect remotely wirelessly, audio and Ethernet ports without forgetting 3 USB 3.0 (compatible with USB 2.0) guaranteeing transfers up to 10 times faster than with USB 2.0 if peripherals USB 3.0 are connected to it.

The chiclet keyboard does not have a numeric keypad while it is a standard in 15 inches, which will not fail to disappoint some. Designed with the help of SteelSeries to adapt to the habits of the players, it can obviously be backlit, here by an RGB system by key, which is practical to discern them in the dark. 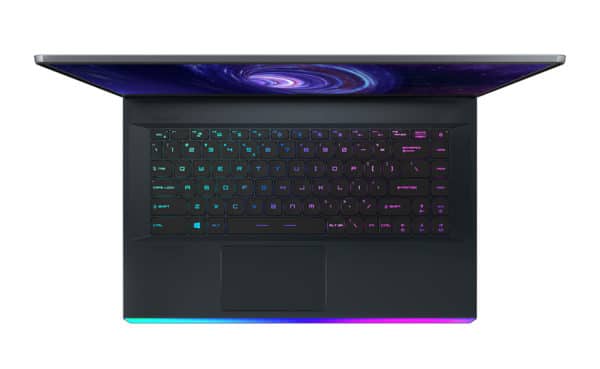 Due to its 100% sRGB and IPS specifications, the screen offers more faithful colorimetry than the average as well as significant vertical and horizontal viewing angles.
It will particularly appeal to players thanks to its frequency of 300Hz which improves responsiveness in games compared to the standard 60Hz. With its precise Full HD definition and its 16: 9 format, the screen is also very suitable for displaying High Definition content and in particular videos. Anti-reflective, the screen also offers better visibility in a bright environment (eg outside) than a shiny screen.

The MSI GE66 10SGS-208FR Raider is for those on a large budget and who wish to acquire a powerful versatile laptop in terms of games but also creation.

The most recent and greedy games can run at a good level of details on this PC because it takes advantage of the dedicated GeForce RTX 2080 Super high-end NVIDIA Turing card with ray tracing, here in Max-Q edition .

Software that takes advantage of GPU computing power to speed up processing (eg Sony Vegas, Adobe Photoshop / Premiere) can use the GeForce RTX 2080 Super, which will be of interest to creatives.

Depending on the tasks performed, the NVIDIA Optimus on-board technology switches automatically and in real time between the GeForce RTX 2080 Super and the Intel UHD 630 solution integrated into the processor.

Optimus makes maximum use of the Intel UHD 630 despite its very modest performance because it is energy efficient and therefore promotes autonomy. The GeForce RTX 2080 Super is in practice activated by Optimus to perform graphics processing deemed too heavy for the Intel UHD 630. These two solutions allow of course to watch photos and videos.

Architectured around an Intel HM470 chipset, the heart of this computer is up to scratch, carefree accompanying the RTX 2080 Super in games. Above all, it delivers a global power capable of satisfying the most demanding users, whether they are players or creators.

Judge instead: no less than 32 GB of RAM is integrated (to see well coming) and are coupled to the Core i9-10980HK Comet Lake-H Octo Core processor, one of the most powerful.

So obviously, the performance provided by this duo is incomparable with 8 GB DDR4 and a Quad Core processor. The difference is particularly important in areas requiring RAM and CPU resources exploiting multicore, such as 3D rendering, photo editing or video editing.

In terms of storage, MSI chooses an SSD with a comfortable capacity of 1 TB rivaling hard drives. But compared to these, remember that an SSD is silent, more robust, less energy-consuming and much faster.

Result thanks to the SSD, this PC is even more fluid and responsive on a daily basis than if it had a simple hard drive. We can therefore concretely get faster on the online game cards but also get game launches / software, processing and much faster starts / stops for example.

As a second M.2 slot is available, you can add a second SSD to this PC if necessary.

Finally with regard to the autonomy of this computer whose weight and thickness are contained for a gaming model (especially as powerful), count on about 7 hours of battery operation in light use.
However, it is to be expected that this PC will be heard and heat up when it is strongly pushed (ex: games, treatments).