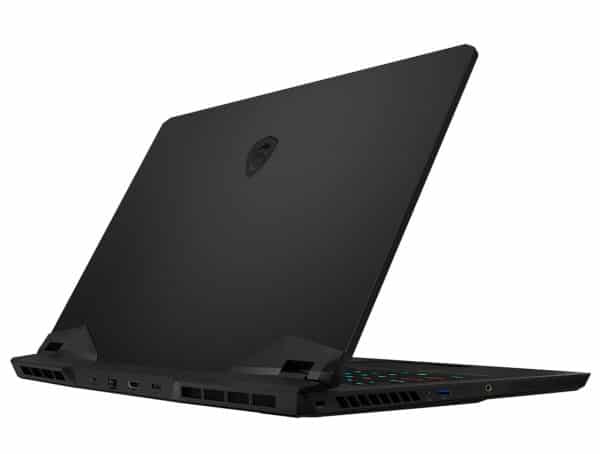 Designed to play and create, the MSI GP76 10UE-417FR Leopard is a powerful black versatile laptop PC with its Octo Core i7 Comet Lake-H processor and its 16 GB of RAM which accelerates multimedia processing like the GeForce graphics card. NVIDIA Ampere high-end RTX 3060 with ray tracing capable of running recent games. Equipped with a 15-inch IPS Full HD anti-glare display with frequency of 144Hz that improves fluidity in games, this computer for gamers and creatives enjoys enhanced responsiveness thanks to its fast 1TB SSD storage, a retro chiclet keyboard RGB illuminated as well as a Wi-Fi ax and USB-C connection, but ignores the Thunderbolt.

All dressed in black and thus relatively discreet, this designer-oriented gamer laptop nonetheless adopts the codes of the genre with angular lines.

It is cooled by Cooler Boost 5 technology via 2 fans, 6 heat pipes and ventilation grilles.

The connection of this computer designed to play and create is good, made up of 1 USB-C, Bluetooth 5.0 and Wi-Fi ax modules ( more recent and efficient than Wi-Fi ac ) to communicate and connect remotely without -wired, an HDMI video output useful for easy connection to a TV or monitor for example, Ethernet and audio ports but also 3 USB 3.0 (USB 2.0 compatible) guaranteeing transfers taking place up to 10 times faster than USB 2.0 if USB 3.0 peripherals are plugged into it.
However, some will undoubtedly regret the absence of Thunderbolt 3.

The result of a collaboration with SteelSeries to adapt to the habits of players, the chiclet keyboard can of course be backlit so that its keys can be correctly discerned in the dark, here by an RGB system per key. 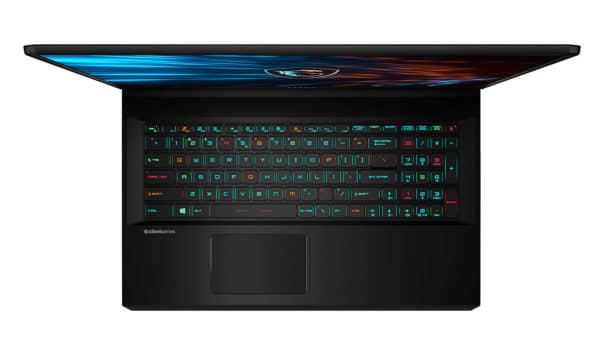 Gamers will appreciate that the screen boasts a 144Hz refresh rate which improves fluidity in games compared to the 60Hz standard. Creatives will also be interested because the screen reproduces colors more faithfully than average while having large vertical and horizontal viewing angles, thanks to its 100% sRGB and IPS characteristics. It is also very suitable for displaying videos and more generally High Definition content thanks to its 16: 9 format and Full HD definition. Anti-reflective coating, the screen also offers better visibility than a shiny glossy panel in a bright environment (eg outdoors) while being more restful for the eyes in prolonged use.

The MSI GP76 10UE-417FR Leopard targets those looking for a versatile 17-inch laptop PC with a high performance focus on gaming and creation.

It benefits from an SSD storage with a large capacity of 1 TB that rivals hard disks in this area to accommodate multiple files, software and games.

But remember that an SSD is silent while being more energy efficient than a hard drive, more resistant to shocks and much faster.

Thanks to the SSD, we thus benefit from games / software launches much faster than with a hard drive, as are the processing and start-ups / shutdowns, and we reach, for example, faster on the cards of online games.

This is good because this gaming laptop PC has the GeForce RTX 3060 , a dedicated high-end NVIDIA Ampere graphics card with ray tracing. Enough to run recent games and thus interest players.

Creators will also appreciate this GPU since it speeds up processing under software that takes advantage of GPU computing power (eg Adobe Photoshop / Premiere, Sony Vegas).

Optimus gives maximum preference to the Intel UHD 630 solution integrated into the processor despite its very modest services because it uses little energy, which favors battery life.
Bet on this about 4 hours of battery operation in light use.

Concretely, the GeForce RTX 3060 is activated by Optimus to perform graphics work too heavy for the Intel UHD 630. With one or the other, it is of course possible to watch photos and videos.

The Intel UHD 630 is integrated within the Core i7-10750H, Hexa Core Comet Lake-H processor associated with a good amount of 16 GB RAM around an Intel HM470 chipset.
The global power provided by this heart is able to satisfy demanding users, whether they are gamers or creators.

However, the former must keep in mind that currently in games, the contribution of the Hexa Core is variable compared to the Quad Core.
The creative ones will appreciate to obtain much faster processing than with a Quad Core processor and 8 GB DDR4. We particularly feel the difference under work requiring CPU and RAM resources using multicore, such as photo editing, 3D rendering or video editing.

On the scalability side, it should be noted that an M.2 slot is free to add a second SSD in the future if more space is needed.

Finally, this laptop is heard and heats up when pushed hard, but it remains at levels controlled for a gaming computer. If its significant weight and imposing format clearly do not position it as one of the most transportable there is, its 17-inch format is nevertheless comfortable in predominantly sedentary use (eg at home).