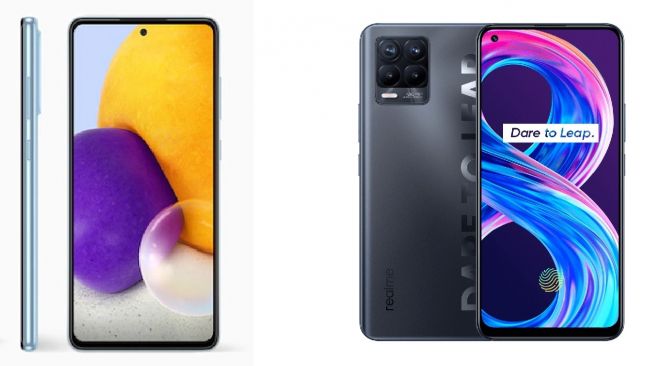 Realme 8 Pro vs Samsung Galaxy A72, who is superior?

The specifications for Realme 8 Pro and Galaxy A72, which Samsung launched last March in our country, are quite similar. Starting from the processor, screen, to some of its features. But in terms of price, Realme is much friendlier.

Here is a comparison of Realme 8 Pro vs Samsung Galaxy A72:

Design
Realme 8 Pro design comes with dimensions of 160.6 x 73.9 x 8.1 mm and weighs 176 grams. The back of the phone is covered in plastic and features a four camera module arranged in a square. While the front carries a punch hole selfie camera on the top left side.

The Samsung Galaxy A72 comes with dimensions of 165 x 77.4 x 8.4 mm and weighs 203 grams. The back of the phone is covered in plastic and features a four camera module arranged by three vertical lenses and one lens plus an LED flash on the side. While the front carries a punch hole selfie camera in the middle.

Here, the Galaxy A72 is bigger and thicker than the Realme 8 Pro. For the camera module, both have a unique design.

Realme 8 Pro screen uses a Super AMOLED screen measuring 6.4 inches. The phone has a resolution of 1080 x 2400 pixels, a screen to body ratio of 83.3 percent, and the Always on Display feature.

The screen of the Galaxy A72 is bigger than the Realme 8 Pro.

The Samsung Galaxy A72 carries quad-camera technology which consists of a 64 MP main camera, a 12 MP ultrawide camera, an 8 MP telephoto camera and a 5 MP macro camera. While the selfie camera has a 32 MP resolution.

The main camera of the Realme 8 Pro is superior. However, the Galaxy A72 has a supporting camera and a selfie camera with a larger resolution.

The Samsung Galaxy A72 is supported by a Snapdragon 720G processor and is equipped with 8GB 128GB and 8GB 256GB RAM / ROM variants. Cellphone based on the Android 11 operating system and the One UI 3.1 interface.

The only difference lies in the storage options, where the Galaxy A72 presents more variants.

Other features
The Realme 8 Pro battery has a capacity of 4,500 mAh which is paired with 50 W fast charging. Other features that are also presented are Dual SIM, 4G, an additional Micro SD slot, an in-screen fingerprint sensor, NFC, USB C, and a 3.5mm audio jack port.

The Galaxy A72 comes with a 5,000 mAh battery capacity with 25 W fast charging technology. Meanwhile, other features that are also presented are the IP67 certificate for water resistance, an in-screen fingerprint sensor, NFC, a dual SIM slot, the other of which can be replaced with a microSD, 3 audio jack, 5mm, and a USB-C port.

The Galaxy A72 excels in battery capacity and is IP67 certified for water resistance. But the Realme 8 Pro wins at charging speed.

More from SamsungMore posts in Samsung »