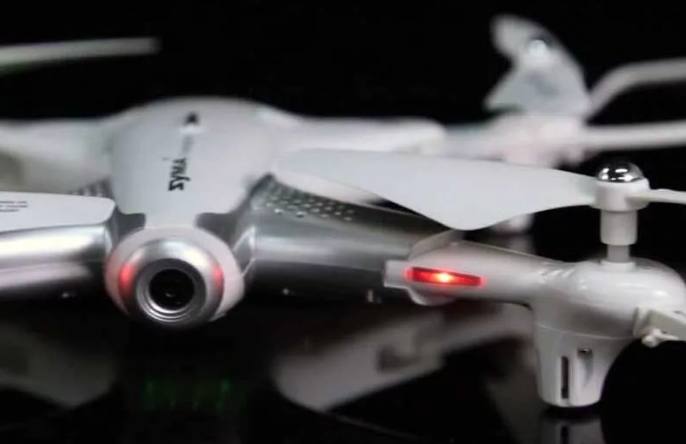 SYMA Z3 Review: The Crazy Quadcopter at a Budget Price

The X5UW quadcopter line from the Chinese manufacturer Syma is considered the best option for novice pilots. In this review, I will look at the flagship model of the series – SYMA Z3, which implements the “Point of Flight” function.

The design of the new quadrocopter SYMA Z3 has received many changes in comparison with the previous model X5C. Now the features have become more rounded, and the landing “legs” are much shorter, for greater stability during a hard landing. The fasteners of the propeller are also reliably protected by chrome plugs from dirt and dust.

Under the rounded base of the Z3 case there is a slot for mounting the camera, which can be fixed in two positions. The camera lens is hidden in a streamlined plastic case, behind it is a memory card slot.

LED backlighting is also available on this drone. To facilitate a better piloting experience, the lights have a different color: the front is red and the back is green.

The battery with a capacity of 850 mAh is inserted into the compartment located on the back of the SYMA case. There are no wires here, the battery is simply inserted inside until it clicks. Unlike other models in the X5 series, the activation button is located on top here, which is more convenient. Slightly higher, the company logo is printed on the case. 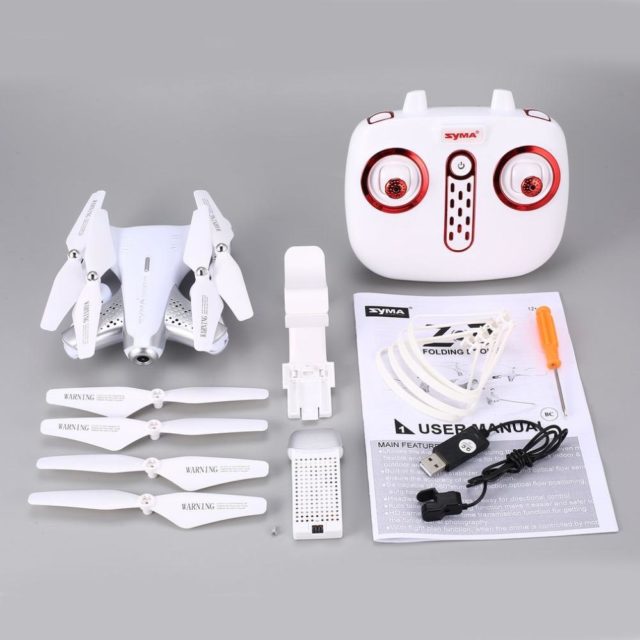 SYMA Z3 is equipped with four gear motors with gears. Their potential is quite enough for dynamic flights in calm weather. The small size of the engines is compensated by wide screws that add Z3 thrust.

Before buying a drone, you should pay attention that the resource of brushless motors is very limited. Despite the protection of the gearbox, the functional elements of the drive will soon need to be replaced. Order spare parts for quadrocopters can be in Chinese online stores, where their cost is low.

SYMA Z3 is equipped with a camera that can shoot video with a resolution of 1366 × 768 pixels at a speed of 15 frames per second. There is also a Wi-Fi module for wireless communication with a smartphone in FPV mode, where you can view the picture in real time, but with a slight delay.

Z3 from SYMA is primarily aimed at novice users. Low quality camera is not designed for professional aerial photography. It does not have an optical stabilization system, so the image looks blurry even with the slightest vibrations of the drone. From 720p resolution, you can squeeze a maximum of 20 fps.

The quality of photos taken on the camera Z3, can be compared with images taken on cheap smartphones. Replacing bad photographic equipment is also impossible here, the quadcopter is not equipped with a universal connector for installing other cameras, just as the UAV carrying capacity is insufficient to lift even the most compact ones.

Drone SYMA Z3 can work in two modes: fast and slow. The first significantly increases the thrust of UAV engines, but adversely affects maneuverability. High-speed flights will definitely appeal to experienced pilots, but for beginners the slower option is preferable.

In this mode, the drone responds well to commands given from the control panel and smoothly changes its location, following the instructions as precisely as possible. There is also an auto-hang function here, and the built-in accelerometer performs the role of a sensor. In addition, Z3 can fly on the route built on the smartphone.

The operating frequency of the console is 2.4 GHz, and the signal transmission is possible over a distance of 80 meters. The smartphone is synchronized with the drone through the Syma Go application, which is installed using a QR code printed on the Z3 case.

An image from the quadrocopter’s camera is transmitted to the phone’s screen, it also contains touch joysticks, a flight mode selection icon, information about the battery charge and the current camera status. Tilting the smartphone or pressing the touch controls, the drone perceives as pressing the physical buttons of the remote control. The latter is not recommended for beginners, as a drone can unpredictably change its trajectory.

How does it fly?

In terms of flight practice, SYMA Z3 showed very good results. The sensitive and responsive control of the drone will definitely appeal to beginners. By switching between the two speeds, you can select the priority of thrust or controllability. The drone flawlessly performs coups in the air, works out an automatic takeoff and landing, keeps well at one point.

Auto-hanging here works well only at maximum load; in slow mode, the wind blows the UAV. The “Point of Flight” function on Z3 is implemented without using GPS navigation, it’s enough to set the trajectory on the smartphone screen and the device will perform maneuvers along a given route.

During automatic flight, one of the control panel knobs is displayed. With its help, the pilot can fly around obstacles in the path of the quadcopter. Having flown to the end point of the route, SYMA switches to auto hang mode until it receives the following commands. At this point you need to be especially attentive. Do not go too far, otherwise after a loss of signal, the device will simply fall down.

Before flight, all sensors need to be calibrated. To do this, place the device on a flat horizontal surface, turn it on, pull the left and right stick of the console simultaneously down and to the left. Wait a bit and do the same, just to the right. The calibration process is complete.

In the back of the case Z3 is a compartment for a lithium-ion battery with a capacity of 850 mAh. It is easily inserted inside. However, for the sake of such an improvement in design, we had to sacrifice the possibility of installing a second battery, and any third-party accessories are incompatible.

A full battery charge cycle takes about 90 minutes. After that, the quadcopter can fly for about 8 minutes; if you take off the camera, the flight time increases to 10 minutes.

SYMA Z3 is an inexpensive, compact and very beginner-friendly quadrocopter. Quickly mastering the drone makes it easy to use the intuitive interface and the Syma Go application, with a simple control panel and several flight functions. Experienced users will enjoy the presence of high-speed mode for faster and more dynamic flights.

Positive impressions darken a small amount of battery, with which you can count on a maximum of 10 minutes of flight Z3. The camera also disappoints the poor quality of shooting and, if it plays an important role for you, I advise you to consider another UAV.

In general, to buy in order to learn how to fly, the SYMA budget drone can be considered. This is a great device for entertainment and a new hobby for little money.

More from CameraMore posts in Camera »