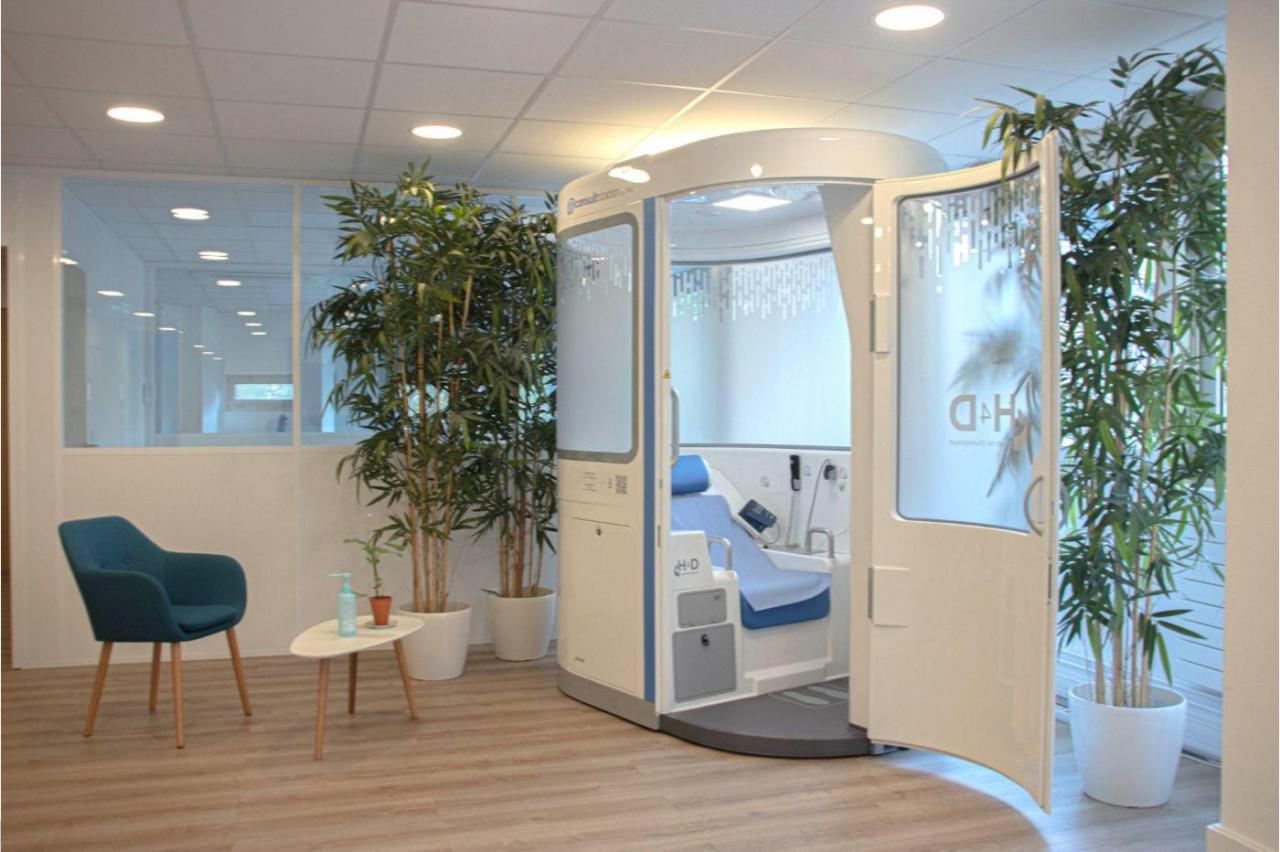 Halfway between the space module and the photo booth, the H4D clinical telemedicine booth hopes to put an end to medical desertification, but also to facilitate the care of urban dwellers.

Almost unknown to the general public before the pandemic, teleconsultation has exploded in recent years, from 0.04% of consultations in 2019, to nearly 4.5% in 2021 (Odoxa figures for ANS). Powered by the Doctolib platform, then by some outsiders like Qare or Maiia, the practice seduces more and more, and for good reason: not only is it much easier and faster to make an appointment, but in addition it is possible to consult while staying at home. A double advantage particularly attractive in times of covid-19. During the first lockdown in April 2020, the number of teleconsultations exceeded 4.5 million appointments in one month.

While it is difficult to deny the practical side of teleconsultation, the observation remains more mixed regarding the quality of the diagnosis. Deprived of his tools, and most of his usual senses, the doctor can finally rely only on the camera (not always effective) of the smartphone and the feelings of his patient. A situation that does not allow him to practice in good conditions, laments Dr. Franck Baudino, founder of the start-up H4D: “With a phone, I can not listen to your heart or your lungs, I challenge any doctor to treat even a cough in adults in this way”.

The medicine of the future already exists today

This is where H4D’s Consult Station comes in. Less known than Doctolib, the start-up has also revolutionized the world of telemedicine. In 2006, its founder, Dr. Franck Baudino, filed the first patent for a project with excessive ambitions: a connected medical practice, capable of operating without any doctor physically present on board. After seven years of research and development, 28 patents and five years of certification with European regulations and the US Food and Drugs Administration (FDA), the cabin finally obtains its status as a category 2 medical device, a mandatory passage to practice on the old continent.

With its fifteen sensors and measuring instruments, its impressive technical arsenal and the accompanying software suite, the H4D cabin is able to diagnose and treat 98% of patients after a consultation. A much higher figure than during a conventional teleconsultation, which can only diagnose 5% of consultations. “It is for this reason that we now make the difference between telemedicine, and clinical telemedicine, so that people understand the difference,” explains Franck Baudino.

Decentralize the doctor, but not medicine

Once installed on the reclining seat of the cabin, it must be admitted that the small space is impressive. In front of us, a camera and a screen allow the doctor to follow the teleconsultation remotely. A little further down, there is a place to accommodate the vital card, and to issue a paper prescription. To our right, a touch screen allows you to configure the device and then answer a series of preliminary questions. On both sides, 15 sensors and instruments are intended for taking measurements.

The consultation finally begins like any physical appointment with the doctor: after a quick exchange on our health habits and the creation of a patient file, place to auscultation. For the stethoscope as for the rest of the instruments, it is up to us to place the device correctly, under the indications of the doctor who then triggers the measurement. Then comes the oxygenation of the blood, the taking of tension and temperature, then the weighing. The practitioner then guides us to perform an abdominal self-palpation, necessary to detect certain pathologies.

For further examinations, the cabin also contains a dermatograph, which makes it possible to make dermatological quality images, as well as an arsenal of instruments intended to assess sight and hearing, but also possible ENT conditions.

For a first clinical teleconsultation experience, it must be admitted that the situation is intimidating, especially when it comes to manipulating the instruments yourself. Guided by the practitioner, the exercise is nevertheless simpler than it seems, and even ends up becoming didactic. The most complex part of the consultation ultimately falls to the doctor, who in turn has the task of guiding us while interpreting the signals remotely. “Carrying out a remote medical consultation is not the same as in person,” explains Franck Baudino. “In addition to training doctors in the technical and software part, we also had to develop a new branch of medicine called telesemiology, or remote sign study.”

Of the 272 most frequently diagnosed pathologies, the creator of H4D and his team, in collaboration with the CHU and the University of Angers, have thus embarked on the heavy mission of extracting visible symptoms to apply them to the field of teleconsultation. A work that is beginning to bear fruit, with its publication in some scientific journals.

At the end of the consultation, we finally leave with a paper prescription, a complete medical follow-up accessible from the application (entirely stored on Orange secure servers), but above all the impression of having benefited from a real medical consultation, far from the frustration sometimes generated by conventional teleconsultations. For his part, the practitioner systematically sends a detailed report to the attending physician. An ethical approach, says Franck Baudino, who wishes to “respect our patients, but also our colleagues”. Note that in case of emergency, the doctor may also decide to transmit the GPS coordinates of the cabin directly to the emergency services.

Even more futuristic, the Consult Station is able to work on its own. Intended for prevention, the check-up mode makes it possible to carry out different measurements, in order to deliver a preliminary diagnosis. A particularly useful process in the emergency departments of a hospital in particular: Since 2014, the cabin has been installed at the Vert Galant Private Hospital in Seine-Saint-Denis in order to improve the triage and care of patients, but also reduce their waiting time, and facilitate the transmission of health data.

The end of medical deserts?

Implemented in hospitals, but also in some care centers, in private companies (especially for annual medical visits and occasional illnesses), town halls, or directly in companies, the H4D solution now aims to put an end to medical deserts, both in isolated countryside and in large cities, where it is increasingly complicated to make an appointment with your doctor. The only real obstacle to the democratization of the service, which is revolutionary, is its economic model, which is still difficult to apply for small private companies and certain public authorities, and the ethical questions linked to an installation in certain places of sale, in particular pharmacies.

Rented 2900 € per month, the H4D cabins plan to be declined in new more affordable devices. Note that this rate is partly explained by the fact that for the moment, it is up to the company or the community to pay the bill. Patients, for their part, are not impacted by any price increase: consultations are charged €25 without exceeding fees, and directly supported by the third-party payer. Currently, no payment system is integrated into the cabins, even if Franck Baudino does not exclude an evolution of the care in the future, in accordance with French and European legislation.

More from OtherMore posts in Other »