Convertible to Tablet, the HP Pavilion x360 14-dy0008nf is a versatile 2-in-1 Ultrabook with a 14-inch IPS Full HD touchscreen that can be opened 360 °. Elegant with its silver design, this hybrid laptop PC performs well in everyday use thanks to its good amount of 16 GB RAM and its Quad Core i5 Tiger Lake Intel processor with Iris Xe graphics solution capable of running games not too much. demanding. In addition, this thin and light computer that can be transformed into a Tablet benefits from enhanced responsiveness thanks to its fast 512 GB SSD storage, USB-C connectivity but also a backlit keyboard.

With its 360 ° opening frame and Natural Silver design, this 2-in-1 Ultrabook, which can be recharged at 50% in 45 minutes, has a sober and elegant but also original look.

It can be converted into a Tablet thanks to its screen adorned with multi-touch touch technology thanks to which it is possible to interact with the system and the software, by pressure / gesture of at least one finger applied to it.
Due to its tactile aspect, the screen is brilliant: it therefore gives punch to the colors but proves to be subject to reflections in a bright environment (eg outdoors).

The screen also benefits from IPS technology ensuring significant vertical and horizontal viewing angles. Its colorimetry is however average, lower than that of more high-end IPS panels.
Thanks to its 16: 9 format and precise Full HD definition, the screen is in any case very suitable for displaying videos and more generally High Definition content.

The chiclet keyboard has a practical backlighting system for the keys to distinguish them correctly in the event of reduced ambient light.

The connectivity integrated into this hybrid Ultrabook is correct, even if we regret that HP did not choose the more recent and efficient Wi-Fi ax.
Here we find wireless Wi-Fi ac and Bluetooth 5.0 modules for remote communications and connections, a useful HDMI video output to easily connect this PC to a TV or monitor for example, an audio port, 1 USB- C without forgetting 2 USB 3.0 (compatible with USB 2.0) guaranteeing transfers up to 10 times faster than USB 2.0 if USB 3.0 peripherals are connected to it.

The HP Pavilion x360 14-dy0008nf is a responsive compact High Definition Laptop PC that can be transformed into a Tablet and designed for everyday general-purpose use.

It delivers good overall performance able to suit many users because it relies on a good amount of 16 GB RAM above average very appreciable in multitasking as well as a low power Tiger i5-1135G7 Quad Core processor Lake.

In addition, the latter houses the Iris Xe graphic part (tested by us) . However, its performance is clearly superior to those of the classic Intel UHD 620.

In practice, we can therefore watch photos and videos on this versatile 2-in-1 Ultrabook but also run games that are not too demanding in terms of graphics resources.

The storage is here entrusted to an SSD which clearly reinforces daily responsiveness compared to a hard drive. Thanks to the SSD, we obtain much faster starts / stops, processing and launches of software than with a hard disk for example and reaches for example faster on the cards of online games. 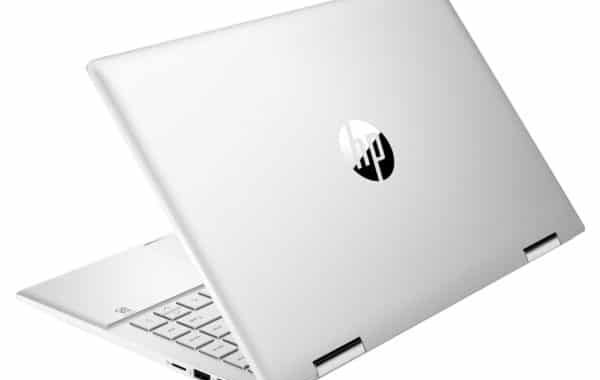 Because an SSD is much faster than a hard drive but also silent, less energy-consuming and more robust.
With its 512 GB, the SSD here integrated offers a capacity similar to the standard of hard disks.

But if one needs additional space, one can rely on an external storage unit. Favoring a USB-C / USB 3.0 device then represents an interesting solution to benefit from fast transfers.

As for the battery life of this hybrid Ultrabook convertible into a Tablet whose transport is facilitated by its compactness, finesse and lightness, expect around 7 hours on battery in light use.