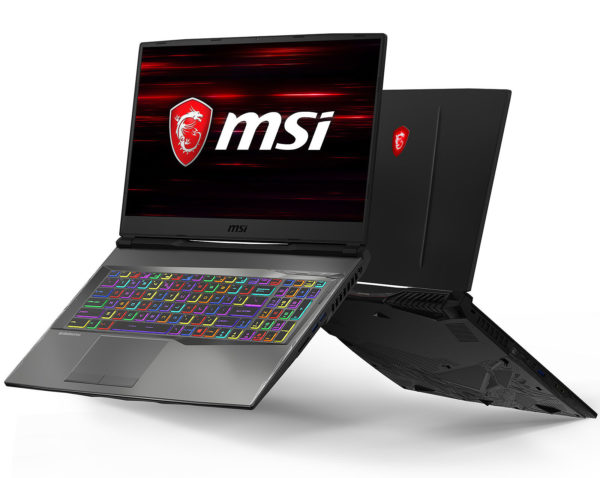 The MSI GP65 Leopard 9SE is a 15-inch portable gamer that perfectly illustrates the concept of compromise. The components and input devices are at the top while the envelope leaves a little to be desired (plastic case). 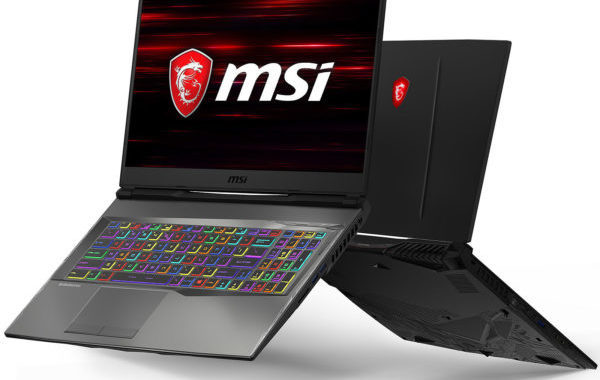 Here are the technical characteristics of the tested model: MSI GP65 Leopard 9SE

The GP65 Leopard\’s case is a projection of its predecessor the GP63 Leopard, which involves the use of a lot of plastic. Only the back of the lid inherits a brushed aluminum surface that visibly marks fingerprints elsewhere. The turn of the plastic keyboard does not resume the brushed GP63 design in favor of a smooth and shiny finish. This surface is much more resistant to marks and fingerprints.

The chassis itself is quite stable with minimal bending along the keyboard. The space where the hands rest is very solid and does not deform under pressure. Unfortunately, as on the GP63, the thin cover is very sensitive to torsion with a big weak spot located in the bottom of the lid between the hinges and the center. The hinges themselves are snug, allowing an opening of one hand up to about 75 degrees, then the base begins to lift with the tilting of the screen. The hinges allow the screen to open at 150 degrees.

Although we can not really talk about finesse and lightness here, the GP65 Leopard is relatively compact for a 15.6-inch PC gamer. This is largely due to the thin frame surrounding the screen that significantly reduces the GP65\’s form factor.

The supply of connectivity is varied. Among its highlights are the dedicated microphone and headphone jacks, the two display options (HDMI 2.0a and mini DP 1.4) and the four USB ports, including two USB 3.2 Gen 2. However, the tester is not satisfied the layout of the interfaces and in particular the two USB ports on the right side of the front of the machine that force to cope with connections if you handle a mouse on that side. The absence of Thunderbolt 3 is noteworthy but not unexpected given the price. In addition, the SD card reader is particularly slow (less than 30 MB / s).

MSI changed the policy between GP63 and GP65. While maintenance was easier on the old model, here are some pitfalls that discourage opening the PC. There are in all eleven cruciform screws easily identifiable but one is hidden under a sealed sticker (warranty in play). In addition, the plate is secured with small, tight plastic hooks that the tester has failed to defuse without damaging the chassis. Be aware that there are two M.2 ports available inside.

The partnership between MSI and SteelSeries has given some of the best keyboards found on gaming laptops and the GP65\’s keyboard continues in this trend. The keys offer good movements with a return both flexible and firm typical of PC MSI. The layout is good with some disadvantages: the Windows key is located on the right side instead of the left side and the Del key is too far from the alphanumeric keyboard. In addition, the keys are a little smaller than other MSI keyboards, which can lead to a few typos.

The multicolored backlighting by key allows a high level of customization via the included SteelSeries Engine 3 software. The sides of the keys are translucent and allow the lighting to shine brightly. A welcome attention is the highlighting of function keys when the Fn key is held down. Thus, the secondary keys such as the volume and brightness controls on the display turn red while the rest of the keyboard backlight is off.

For its part, the touchpad of 12.1 by 6.4 cm is smooth and offers a good glide. The tracking, however, is a bit capricious and requires a bit of pressure for more precision. Dedicated mouse buttons are a welcome addition, especially as they are firm and well defined, but the mechanism seems a bit hollow.

This is the great strength of the MSI GP65 Leopard 9SE according to the tester, the screen. This is a full HD definition IPS panel (1920 x 1080 px) with a refresh rate of 144 Hz. Given the tariff positioning of the PC, the quality of the screen is impressive with its brightness at the top of the screen. medium (327 nits) and its vivacity that ensures gameplay at higher speeds for a perfectly smooth rendering. The contrast ratio is not as good but remains correct (871: 1) and the lighting of the slab is not perfectly uniform. There is no detectable dynamic light (PWM), it\’s a good point.

Surprisingly, the GP65\’s screen is also extremely color-accurate with a Delta E of less than 2 and the sRGB spectrum is almost fully covered (96%)

Built around a 9th generation Hexa Core i7, 16GB of RAM, 512GB SSD storage and a GeForce RTX 2060 Turing Ray-Tracing, the test model brings together the benchmark for the tester configuration to play in good conditions at this level since it establishes a good balance between price, performance and thermal emanations. Namely that the processor is rather well-equipped inside the GP63 Leopard and that it maintains frequencies in Turbo over time on all the cores (despite a small drop measured midway during the test).

The GeForce RTX 2060 is doing very well too. Most titles change to 1080p / Ultra and reach or exceed 60 FPS. However, to take full advantage of the high refresh rate of the screen, players will sometimes have to lower the details on Medium / High to raise the FPS above 100.

You will have noticed, MSI has chosen to put the package on the performance of its GP65, and it comes as often at the expense of noise and temperatures. The PC offers some control over the speed of ventilation via the MSI Dragon Center software with predefined profiles. The higher of these settings activates the fans, and the sound is piercing (52 dB). Using the medium fan setting causes the fans to ramp up aggressively, but the noise is attenuated. For lighter use (web browsing or video playback), the fan turns on but turns slowly and is not audible.

Question temperatures, better not to play with the PC on the lap. Faced with the extreme test, the surfaces blithely exceed 40 ° C and reach even 50 ° C in play under the base. Fortunately, the ZQSD keys and the arrow keys warm up more sensibly.

Unsurprisingly, the battery life does not lead wide. The combination of a 51 Whr battery and a 144 Hz screen does not allocate much more than 4 hours in web browsing via Wi-Fi. Although this is a bit above average for a gaming laptop at this rate, this is not enough to ensure a day\’s work away from a catch. It is no longer uncommon for some gaming PCs to be around 8 hours in current use.