There is no longer any doubt that Dell is about to unveil its next XPS 15 9500, successor to the XPS 7590, as well as a new Dell XPS 17 9700 , leaks and other rumors having fueled the web in recent weeks. . But it is a leak of another order committed by Dell France which lifts the veil on the list of specs of these long-awaited machines and thus gives a complete overview of their capabilities. See rather.

If we rely on the design alone, the XPS 17 is obviously a larger version of the XPS 15. It eliminates any border under the screen and accommodates the speakers on each side of the keyboard. Obviously, the XPS 17 is larger. It reaches a maximum of 2.51 kg for a 374 x 246 x 19.5 mm format .

Considering the components announced, it would seem that Dell has made an effort to use the additional space of the chassis judiciously. Indoors, it is powered by Intel Core Comet Lake-H processors up to Core i9-10885H Octo Core , associated with up to 64 GB of RAM and up to 4 TB of SSD storage thanks to the two PCIe slots NVMe. The graphic choice will be made between the chip integrated in the processor and the dedicated cards GeForce GTX 1650 Ti 4 Go GDDR6 or GeForce RTX 2060 6 Go GDDR6 Turing. Interestingly, the source says it is the first XPS to use a new vapor chamber cooling system .

Regarding the screen, Dell will offer the new XPS 17 with a choice of 16:10 FHD (1920 x 1200 px) or touchscreen UHD (3840 x 2400 px) panels. Whichever you choose, it takes advantage of the famous InfinityEdge design and covers 100% sRGB or more with 500 nits of brightness and 60Hz refresh. Above the screen is a 720p HD IR camera supporting authentication via Windows Hello (also possible via the fingerprint reader).

Also note the choice of ExpressCharge battery (3 cells 56WHr, 6 cells 97WHr) and the presence of four speakers . In this regard, the Dell XPS 17 is apparently the first laptop to include the Waves Nx 3D audio system, software that Dell claims has been tuned by multi-award-winning producer Jack Joseph Puig.

In the drawers of Dell, there is also an update of its XPS 15, which one could rightly qualify as subtle. Like the Dell XPS 13, it too loses the border under the screen for an even more immersive InfinityEdge result. Consequently, the size of the XPS 15 has been reduced to a 344 x 230 x 18 mm format for 1.85 kg or 2.05 kg depending on the components chosen. It is a beautiful thinning.

It offers a choice of screen similar to the XPS 17 but with an obviously reduced size (15.6 inches), the same choice of Comet Lake-H processors and up to 64 GB of DDR4 RAM as well. For the graphics part, it is limited to the iGPU or the GeForce GTX 1650 Ti 4 GB GDDR6 with the support of a single PCIe SSD slot for storage up to 2 TB and an expected reduction in the number of ports ( 2 USB 3.1 Gen 2 Thunderbolt 3 ports for example).

Finally, Dell will not include the Windows Hello IR camera in its XPS 15 but biometric authentication will remain possible via the fingerprint reader. Dell has also reduced the battery capacity in the XPS 15 from 97 Wh to 86 Wh. This remains unconfirmed for the moment, but it seems that the transition to a screen format of 16:10 may have been removed the OLED option present on the XPS 15 7590. 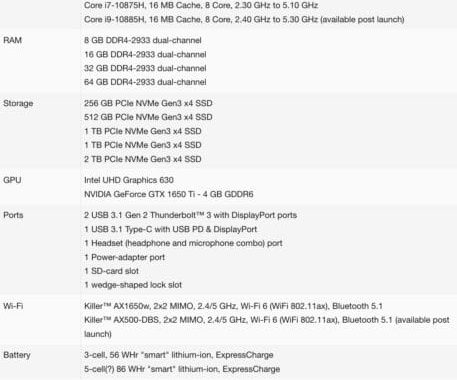 We have no information about the price or availability of the XPS 17 9700 or XPS 15 9500, but we have no doubt that Dell will announce it soon.